Eximbank will increase loan funding by 16%

Eximbank will increase loan funding by 16% 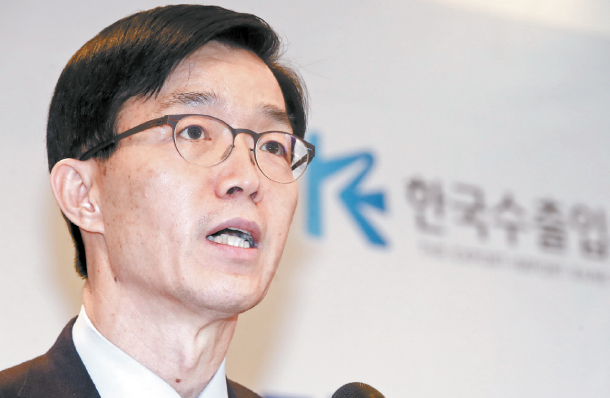 Export-Import Bank of Korea Chairman Bang Moon-kyu speaks at a press conference on Monday at the Korea Federation of Banks in central Seoul. [YONHAP]

The Export-Import Bank of Korea (Eximbank) will expand its loan program to 69 trillion won ($60 billion) for Korean companies this year, up 16 percent, to help the nation’s economy after a tough 2019.

Last year, Korea’s exports dropped by 10.3 percent to $542.3 billion. Deals related to overseas construction and shipbuilding and the exports of semiconductors, major business areas for Eximbank, also dropped by 20 to 30 percent, the bank said.

Of the 69 trillion won loan budget, 28.1 trillion won will be dedicated to supporting small- and midsize enterprises, followed by support for the materials, parts and equipment industry, with 20 trillion won; overseas infrastructure, with 12 trillion won; and innovative growth, at 8.5 trillion won.

The amount allocated for overseas infrastructure is a 41 percent increase, the biggest jump of all categories.

“The new year started off with some issues in and outside of Korea, starting with tensions in the Middle East. It seems that this year won’t be any easier,” said the Eximbank Chairman Bang Moon-kyu at the press conference on Monday.

“We target 69 trillion won in loans to boost exports, which is the core growth engine of Korea. We will not just settle with numbers but will try to help companies and industries to receive financial support when they really need it.”

Bang said he will especially focus on clinching deals in strategic regions, including Indonesia, Vietnam, India, Russia and Myanmar.

“[The bank will] deviate from getting simple subcontract deals but will try to help companies get deals in which they can invest and develop together for their high-value business,” the policy lender said.

“[The bank is going to] implement non-financial services, where the bank helps companies to evaluate feasibility of the project.”

Chairman Bang admitted that last year was one of the worst years in terms of overseas construction deals.

“Increasing financial support for overseas infrastructure by 41 percent is a challenging goal, indeed, because last year we saw about a 30 percent drop in the amount of orders,” Bang said.

“But we are seeing some good news from big construction companies from the beginning of this year and expect things to get better, which is why we are into finding bigger projects, such as building liquefied natural gas plants.”

The lender will expand support of up-and-coming industries, taking the loan amount to these areas from last year’s 880 billion won to 1 trillion won this year.