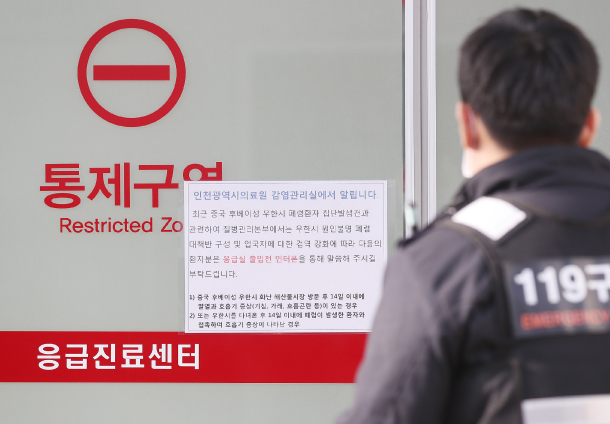 Following Korea’s first confirmed case of a newly discovered coronavirus Monday, a sign warning of the symptoms of the virus is posted at an entrance to the Incheon Medical Center ER ward. [YONHAP]

Korean health authorities on Monday confirmed the country’s first case of the mysterious SARS-like coronavirus, stoking fears of an outbreak across Asia.

In a press conference, Jung Eun-kyeong, director of the Korea Centers for Disease Control and Prevention (KCDC), said a Chinese woman who entered Korea on a flight from Wuhan, China, on Sunday tested positive at Incheon International Airport for a coronavirus infection and was placed under quarantine.

With the discovery of this first case, Korea will be raising its infectious disease alert level from blue to yellow, while launching monitoring teams across the country.

The woman, aged 35, is a resident of Wuhan who said she visited a local hospital in the city after developing a fever, muscle pains and chills on Saturday. The hospital gave her a prescription for cold medicine, which she took, Jung said.

The patient said she had not visited Wuhan’s traditional market nor had any contact with wild animals. While little is yet known about the new coronavirus strain that is believed to have infected 198 people in Wuhan since Jan. 20, Chinese health experts suspect the disease may have started in a seafood market in the city, where animals like marmots are sold.

Coronaviruses are a wide variety of viruses that can cause diseases ranging from the common cold to the Severe Acute Respiratory Syndrome (SARS), which caused over 770 deaths after raging through southern China between 2002 and 2003.

So far, a total of 201 people have been diagnosed with the new strain, tentatively called 2019-nCoV, in China, of which three have died. The virus causes a pneumonia-like disease accompanied by symptoms like a high fever or coughing.

Chinese authorities are on high alert to prevent a possible outbreak as people in the country travel to their hometowns for the Lunar New Year holidays. Particular attention has been placed in monitoring Wuhan, which has a population of around 19 million and is an important transport hub in China.

On Monday, local health authorities in Beijing reported two new coronavirus cases in the Chinese capital, which follows news reports of three suspected cases in Shenzhen and Shanghai. Last week, Japan reported one case and Thailand two, all involving patients who had returned from trips to China.

Health experts in China say the risk of human-to-human transmission is low but recommended people wear face masks in public.

The World Health Organization on Monday said it was likely that close human-to-human contact may have been the cause of some of the transmissions.

The KCDC said it began tests on other passengers and crew from the same flight as the patient and will monitor their health for the next two weeks.

Of seven people who showed symptoms of the coronavirus, three were placed in isolation for testing while the other four were released, Jung said, adding that an additional 14 other people were being monitored in connection with the virus.

The KCDC urged any people who visit Wuhan to refrain from contact with wild animals and not consume uncooked products.

After receiving a briefing Monday, Prime Minister Chung Sye-kyun ordered Minister of Health and Welfare Park Neung-hoo to redouble the government’s efforts to contain any outbreak before the virus spreads further.

“The Health Ministry and KCDC will disclose all information related to quarantine and disease prevention efforts to the people in a swift and transparent manner in order to prevent alarm over the matter,” Chung said.