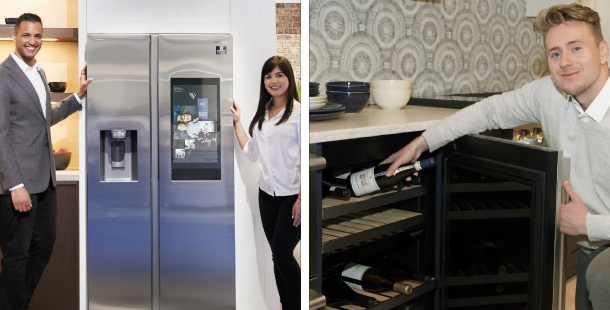 Samsung Electronics and LG Electronics showed off their latest kitchen technologies at the Kitchen & Bath Industry Show, which started Tuesday in Las Vegas.

The annual event is the largest of its kind in the kitchen and bath-related industry, with more than 600 companies showing products.

This year, Samsung introduced an expanded line of smarter appliances powered by the Internet of Things (IoT) and artificial intelligence (AI) technology.

A part of its 1,421-square-meter (15,295-square-foot) booth was set up to be a “Connected Living Zone” that highlighted the company’s Family Hub refrigerators. Releases of this smart refrigerator line won the CES Innovation Award for five years straight including this year’s show, which ended Jan. 10.

The upgraded 2020 models are equipped with “Food AI” software that suggests menus and recipes that can be cooked with ingredients inside. It can also keep track of the fresh food’s condition and connect to other smart appliances in the home.

Samsung also unveiled a Slide-in range that can be controlled by the electronics maker’s IoT mobile app SmartThings to automatically adjust the temperature according to a recipe chosen by the user. The app can also be used to remotely control the range through voice commands, the company explained.

Dayco, the high-end kitchen appliances maker Samsung acquired in 2016, divided its share of the booth into three spaces according to different styles: urban city life, countryside and a coastal beach residence.

LG Electronics put its high-end, built-in kitchen brand, the Signature Kitchen Suite, at the forefront of its 920-square-meter booth. The company plans to expand its U.S. lineup of Signature kitchen appliances to 40 this year.

Compared to Samsung’s focus on upgrading existing products, LG ventured into new product formats like an “undercounter” wine cellar that can be installed beneath a kitchen counter. The fridge can hold up to 41 bottles of wine, and sections are divided to allow different temperatures.

In a similar vein, the appliance maker showed a drawer-like refrigerator consisting of two fridges that can be installed under the kitchen counter. Combined, the appliance has a 47-liter capacity, and each of the sections can be converted into either a fridge or freezer.

In the stand-alone refrigerator segment, the electronics maker showed its LG Studio French Door refrigerator that can produce ball-shaped ice cubes. LG’s refrigerators were also equipped with smart functions that tell an owner what dish they can cook with the ingredients inside and give alerts when products need to be replaced.