Korea to send destroyer to Strait of Hormuz on its own

Korea to send destroyer to Strait of Hormuz on its own 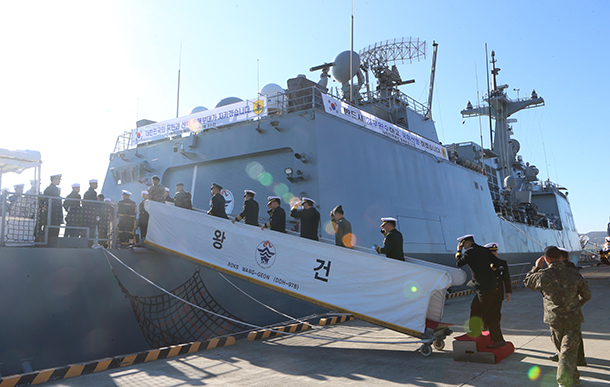 This decision comes after months of pressure from the United States to enlist South Korea’s help in an international effort to defend the strait — the transit route for some 70 percent of Korea’s oil imports — amid escalating tensions with Iran.

The Strait of Hormuz is a 167-kilometer-long (104-mile-long) body of water between Iran and the United Arab Emirates and Oman, measuring only 39 kilometers wide at its narrowest point. Approximately 20 percent of all global oil production and over 30 percent of liquefied natural gas are shipped through the channel, largely to supply the energy-hungry economies of East Asia. The strategic value of the strait has long been regarded by Iran as a trump card against the United States — if relations turn actively hostile.

Seoul also informed Iran of its deployment plan, to which Tehran responded it “understands South Korea’s decision” while explaining its own position on the matter, the official added.

The deployment in particular may work in Seoul’s favor in the cost-sharing talks, as it could demonstrate South Korea is committed to assisting U.S. military operations around the globe. One of the main arguments behind the initial American demand that South Korea pay around $5 billion for 2020 — an almost fivefold increase from last year’s payment of $930 million — was that Washington was helping bolster South Korea’s defense with its military commitments not only within Northeast Asia but around the world.

While an independent operation by the Cheonghae Unit could reduce the likelihood that it is targeted by Iranian forces in the area, experts say South Korean troops could be exposed to a variety of risks, particularly from Iranian submarines imported from North Korea. Tehran is believed to own 21 submarines — 16 of which are Ghadir-class midget submarines built by North Korea that are difficult to detect and can operate in shallow coastal waters.

“[South Korea] must obtain the capacity to comprehensively defend itself in response to both traditional and non-traditional security threats that are advancing and diversifying by day,” Moon said in an address at the meeting. “Our objective is to build a powerful military that can respond effectively in any security environment.”