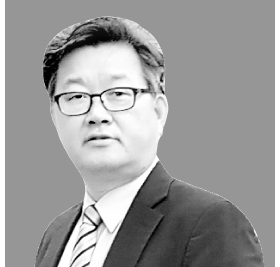 Lee Ho-sun
The author is a law professor of Kookmin University and co-president of the Association of Professors for Social Justice.

Six thousand and ninty-four members of the Association of Professors for Social Justice issued a second statement on the state of affairs on Jan. 15. They were enraged over nonsense, shamelessness and anti-intellectualism over the situation involving former Justice Minister Cho Kuk.

After they issued the statement at the Seoul Press Center, they marched to the Blue House. The professors warned about the danger of hypocrisy, lies and arrogance of the Moon Jae-in administration, urging a grand change in the state administration. The biggest motive for so many professors to get together after last year’s action was their sense of crisis for liberal constitutional order’s destruction and desperation for people’s awareness. The professors made such a judgment because of the lies of the administration.

Those professors saw the contradiction of the liberal camp from its sophistry and stubbornness in the course of the appointment of Cho Kuk as justice minister in the Moon administration.

The grand principle of democracy is that there can be a difference in methods under one goal of developing the community. But they became suspicious of the way the liberal Moon administration deals with state affairs. Professors with various majors looked at major policies of the government such as the establishment of an extra law enforcement agency aimed at investigating high-level officials, including judges and prosecutors, and government-led electoral reforms and the income-driven growth. In the process, the professors found a common thread connecting these policies. It was a “lie.” 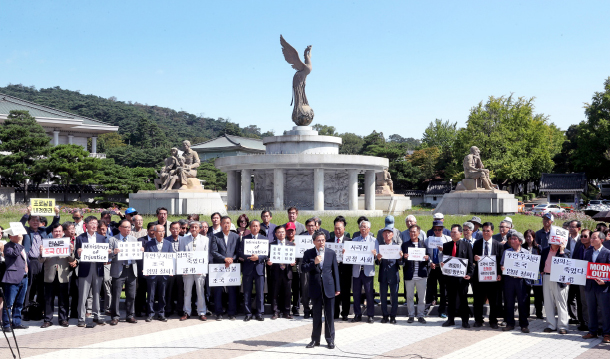 A group of professors hold a rally in front of the Blue House to demand a “fair and just society” from President Moon Jae-in on Sept. 19, 2019. [KANG JUNG-HYUN]

True left and right, and true liberals and conservatives compete over the truth. They can have different perspectives and methods depending on their experiences and according to their values and beliefs, but the background of interpretation should be truth.

Regrettably, however, the Moon administration and ruling party did not hesitate to hide or distort the truth or incite a “palace coup” through the media they already seized or through “blind” supporters. When the bill to create the extra law enforcement body to investigate high-level officials and the revision on the proportional representation were passed at the end of last year, then National Assembly Speaker Moon Hee-sang led the assembly’s expediency. The Blue House officials even openly mocked and undermined indictments on former minister Cho Kuk.

The behavior of disabling the prosecutors’ power to investigate the living power was obvious. What is the destination of the madness of the power that cannot be explained by factional rhetoric alone? The answer is clear if we reflect on historical experiences. It is totalitarianism.

In totalitarianism, a faction monopolizing power exists, a fanatic state ideology is proposed, a nation and party monopolize violence and propaganda methods to force the ideology and an economic system is under the direct control of the state. The police and pro-government groups commit ideological terrors on personal conscience and liberty.

Totalitarianism seen in examples such as the Nazis, the Soviet Union, China’s Communist Party and the Kim Il Sung Dynasty of North Korea is the worst political system of the humanity that destroys the dignity of mankind. The 6,094 professors — as the intellectual watchmen of the time — defined the current state as a “crisis of quasi-totalitarianism.” I felt compelled to warn that the destination could be dystopia.

I urge the Moon administration to stop the dash toward quasi-totalitarianism and turn back. Do not open the door to a “Moon Jae-in dystopia.” I am warning the opposition party not to take hostage innocent people worrying about the country. Now is a tougher time than the opposition party thinks. They should not be blinded by dreamy interests and commit the crime of history as an accomplice of quasi-totalitarianism.