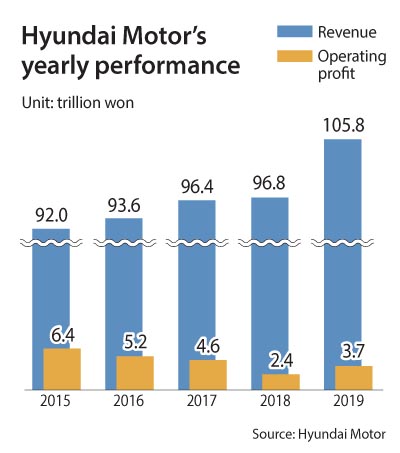 Hyundai’s sales volume was down 3.6 percent on year to 4.4 million units in 2019, due to a general demand slump for vehicles in key markets and several outdated models. But that was offset by the success of new models, particularly in the SUV segment, which accounted for 40 percent of vehicles sold last year. SUVs are more profitable for the carmaker than sedans, as they come with higher price tags.

But the company has set higher goals for 2020 - to hit 5 percent growth on year in operating profits.

“In a situation where difficulties in the business environment sustain, our plan is to continue efforts to increase profitability among our products and expand SUV sales,” said Senior Vice President Kim Sang-hyun. “Whether we hit this 5 percent growth objective this year is more important than ever. For Hyundai, year 2020 is the starting point of optimizing production volume, profit and loss, and in establishing a stable business structure based on brand power.”

The carmaker’s premium brand Genesis launched domestic sales of its first SUV, the GV80, last Tuesday, selling 15,000 units on the first day. Its second SUV GV70 is due to be released in the second half of the year. Hyundai believes the GV70 will boost the sales proportion of SUVs to 43 percent. The Avante sedan and Tucson SUVs will also roll out new models this year.

Hyundai plans to embrace different cost-cutting strategies and incentives according to different markets.

The direction in the U.S. market will largely continue in the same direction as 2019, the carmaker said. New releases will come from the Sonata and Elantra brands as well as the Genesis GV80. The European market will get more eco-friendly and electrified models.

In China, the company will first focus on increasing efficiency in plant operation and stock management, then follow up that strategy with new releases in the second half of 2020.

Hyundai’s Executive Vice President Lee Yong-woo, who is in charge of Genesis, separately laid out plans for the luxury brand - two SUVs and one passenger sedan, the G80, in 2020. Genesis’s first electric vehicle is scheduled to come out in 2021. Lee added the brand, currently sold only in Korea and the United States, is preparing to launch in China and Europe, without specifying a timeline.