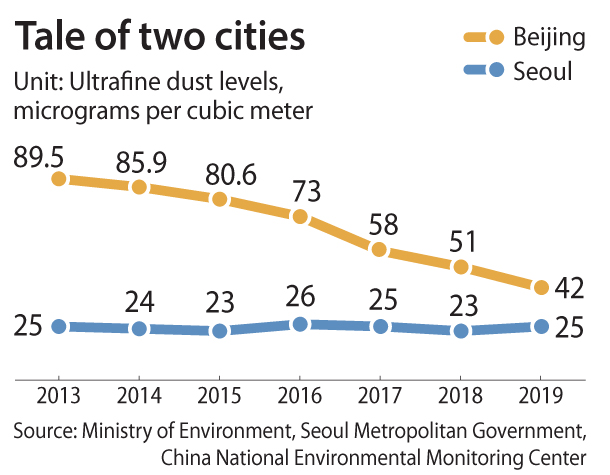 Ultrafine dust in the capitals of Korea and China are composed of similar elements, though some of the elements’ ratios differ greatly, a joint research team of Korean and Chinese researchers announced Wednesday.

The Chinese government’s restrictions on fossil fuel emissions seem to be causing the difference, as Beijing’s air quality improves - and Seoul’s does not.

At this point, however, further analysis is needed to pin down the exact reasons why.

Korea’s joint research with China was the latest effort by the two neighboring countries to battle ultrafine dust, which Korea often blames China for, even as the latter adamantly denies responsibility for Korea’s air pollution.

Jeon Kwon-ho, a researcher from the National Institute of Environmental Research (NIER) in Incheon, said the fundamental purpose of the recent research was to find out the sources of ultrafine dust in Seoul and Beijing.

So far, the research team can say that the pollutants causing ultrafine dust seem to be derived from industrial plants and vehicle exhaust emissions.

Seoul’s ultrafine dust concentrations have not decreased over the years and largely hovered around the same levels, though they were still far lower than Beijing’s current level, data from Korea’s Ministry of Environment showed.

The research was conducted by the Korea-China air quality joint research team under the NIER.

From 2017, the joint research team collected ultrafine dust samples from the Chinese cities of Beijing, Baoding, Qingdao and Dalian and scrutinized their major chemical components.

When comparing Beijing’s ultrafine dust sample with Seoul’s, the researchers discovered that both were mainly composed of ammonium nitrate, ammonium sulfate and organic matter, though the ratios differed.

Ammonium nitrate usually comes from auto exhaust emissions and ammonium sulfate from petroleum and coal combustion, although this study did not determine the precise sources of the components.

Researchers attributed Beijing’s low rate of ammonium sulfate to Beijing’s fossil fuel reduction campaign, saying that the city was seeing sharp declines of the component recently compared to the past.

One thing the researchers have yet to figure out, though, is why Seoul’s ultrafine dust has such a high rate of ammonium sulfate. Theoretically, big cities in which fossil fuel emissions are abundant usually have much higher rates of ammonium nitrate. In Seoul’s case, however, the ratios of both chemicals were the same, 25 percent.

“It was really unexpected,” said Jeon from the NIER. “We’ll need to look into the matter more deeply.”