The prescience of George Orwell

The prescience of George Orwell 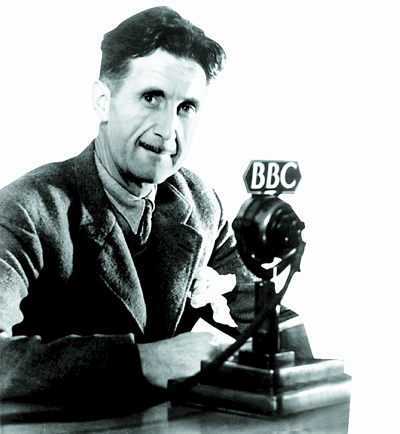 Seventy years ago, on Jan. 21, 1950, he died of tuberculosis in London. The family buried him in a church graveyard in Sutton Courtenay, Oxfordshire. The gravestone bears the epitaph, “Here lies Eric Arthur Blair.” While it may seem too ordinary for an epitaph of a world-renowned writer, it suits him considering his life and works.

He is better known by his pen name George Orwell. George is a common English first name, and Orwell comes from the River Orwell located northeast of London. Having graduated from Eton College, he worked as police officer in Burma and India. Having witnessed the reality of colonial imperialism for five years, he quit and became a writer.

George Orwell is known for two novels, the 1945 satire on Fascist society titled “Animal Farm,” and the 1949 novel about a dystopian society under the surveillance of Big Brother, “1984.”

He was also a reportage writer. When global economic depression spread in the late 1920s, he lived in London and Paris. Based on his experience working at a restaurant, he published “Down and Out in Paris and London.” In 1936, he published “The Road to Wigan Pier” about the desperate reality of miners living in northern England. He investigated the situation by working at the mine and living nearby. Later that year, the Spanish Civil War broke out, and he participated as a member of the Independent Labour Party. In 1938, he wrote “Homage to Catalonia” about the foolishness of the war and ideology issues. The writings based on his own experiences spoke directly to readers and were heartfelt.

On New Year’s Day in 1984, video artist Paik Nam-june presented the live show “Good Morning, Mr. Orwell” by connecting Paris and New York City over satellite. He claimed that the pessimistic prospect of the future that George Orwell depicted in “1984” did not come true. On the 70th anniversary of George Orwell’s passing, I look back on Orwell’s prediction and Paik Nam-june’s evaluation. In 2020, the internet and artificial intelligence are constantly evaluating my brain. Half of the journalists working now have forgotten how to go out in the field. I have to side with George Orwell.