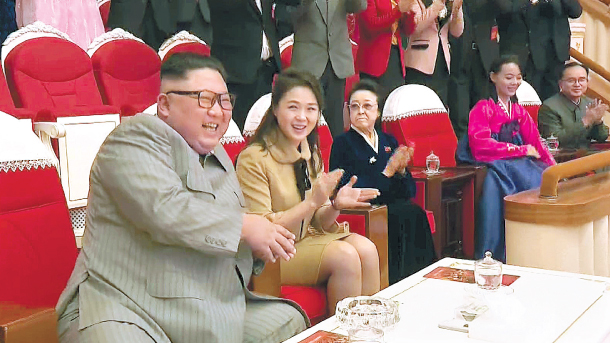 Kim Kyong-hui, the aunt of North Korean leader Kim Jong-un and wife of executed official Jang Song-thaek, re-emerged in public for the first time in six years on Sunday, quelling rumors that she had been purged alongside her husband.

According to the official Korean Central News Agency (KCNA), Kim Kyong-hui attended a musical concert to hail in the Lunar New Year alongside Kim Jong-un at the Samjiyon Theater in Pyongyang. Photographs published by the agency showed her seated in between Ri Sol-ju, Kim Jong-un’s wife, and her niece and Kim Jong-un’s younger sister, Kim Yo-jong.

The 73-year-old is the eldest - and only legitimate - daughter of North Korea’s founder Kim Il Sung, and wielded immense influence during the rule of her brother Kim Jong-il, the father of the current leader.

Two years after inheriting power following his father’s death in 2011, her young nephew Kim Jong-un purged and executed her husband, Jang Song-thaek - the man responsible for attempting a modernization of the North’s economy by way of Chinese investments.

Kim Kyong-hui was last seen in a public setting on Sept. 9, 2013, just three months before her husband was officially arrested at a Politburo meeting broadcast on state television. He was then executed along with several of his close associates on Dec. 13 that year in a dramatic turn of events.

Rumors circulated afterward speculating a variety of fates for Kim Kyong-hui, ranging from those that said she had also been purged, to those saying she had died from a stroke or committed suicide.

Even CNN reported in 2015 that Kim Jong-un had ordered his aunt to be poisoned, to silence her from speaking out on her husband’s purge. The report cited a defector from the regime.

South Korea’s National Intelligence Service however, said in a parliamentary briefing in 2017 that Kim Kyong-hui was alive and was receiving medical treatment for high blood pressure and kidney failure at a facility near Pyongyang.

The photographs released by the KCNA Sunday showed appearance was similar to the last time she was seen in public. Her seating between Kim Jong-un’s wife and sister raised speculation that she may have recovered her former status.

“The fact that Kim Kyong-hui has re-emerged in a public setting foremost shows that the [regime] is trying to show solidarity between members of the Kim family while dispelling notions of internal family disputes arising from the execution of Jang Song-thaek and the assassination of [Kim Jong-un’s older half-brother] Kim Jong-nam,” said Cheong Seong-chang, a leading North Korean expert from South Korea’s Sejong Institute.

The purpose of such propaganda may be to add strength to Kim Jong-un’s drive to achieve an economic breakthrough in the face of continuing international sanctions and deadlocked denuclearization negotiations with the United States, Cheong added.

With the North’s ruling Workers’ Party due to celebrate the 75th anniversary of its foundation in October this year, Kim Kyong-hui may be playing a more prominent role in the regime’s public events, though it is unlikely she will regain the political power she once held in the country, said other analysts in South Korea.

Thae Yong-ho, a former North Korean deputy ambassador to Britain and one of the highest ranking North Korean officials to defect to South Korea, said Kim Kyong-hui’s reappearance suggested the regime was trying to prove she was not killed, in case she suddenly dies owing to her multiple health issues.

Arguing that Kim Kyong-hui acted as Kim Jong-un’s political patron and consented to the purge of her husband, who was estranged from her, Thae said her reappearance signaled “the demise of patron politics and the beginning of Kim Jong-un’s self-rule.”

Kim Kyong-hui has no surviving children, with her only daughter with Jang allegedly having committed suicide while studying in France in 2006. Her half-brother, Kim Pyong-il was recently ordered to return to Pyongyang in November last year after decades of de facto exile as North Korea’s ambassadors to Poland and the Czech Republic.