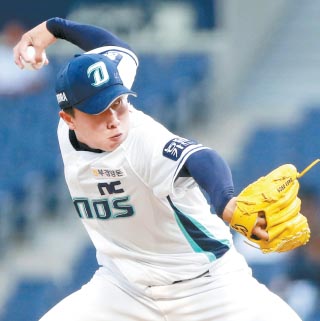 NC Dinos pitcher Park Jin-woo throws a pitch during a game against the KT Wiz at Changwon NC Park in Changwon on July 14. [YONHAP]

In 2019, the NC Dinos redeemed themselves by not only heading to the postseason, but also realizing the potential of their young pitchers.

Among the fielders, young players like Kim Tae-jin and catcher Kim Hyung-jun definitely left impressions, but of all the positions, their pitchers made the most improvement. The league’s best catcher Yang Eui-ji proved to be the perfect addition to successfully lead the Dinos’ young team of pitchers.

While many left an impression, one of the most unforgettable performances of the season came from sidearm pitcher Park Jin-woo. Playing as a starter and as a bullpen pitcher, Park picked up 9 wins, 7 losses and 5 holds with a 3.14 ERA.

Although there were other pitchers on the Dinos roster that had better statistics than Park, his performance stood out because of its unexpectedness. He was an unfamiliar face on the field who had earned just 40 million won ($34,000) in annual salary.

Park was undrafted in the rookie draft twice, after graduating from high school and college. He joined the Dinos as a developing player but he had to switch teams twice through the second round draft in 2015 and in 2017.

First he was drafted by the Doosan Bears, and in the second round draft in 2017, he returned to the Dinos. Throughout this period, Park began to lose hope in garnering in the KBO as younger and healthier pitchers kept on making their debuts. Back in 2018, there were hardly any fans that recognized Park, whose fastball couldn’t even reach 140 kilometers (87 miles) per hour.

But that all changed once the 2019 season started. Using his control as strength, Park started to earn more playing time. Having played 18 games as a starter, Park had a 4.04 ERA, but starting in July, when he became a bullpen pitcher, it got even better. Throughout 23 games in the bullpen since July, he had a 0.50 ERA, giving up only two runs throughout 36 innings, and helped the Dinos significantly in advancing to the postseason.

Q. You’ve just had the best season of your career. How do you feel?

A. Since my debut, it was the first time I played full-time in the KBO and I saw some good numbers in my statistics. It was an unforgettable season.

You couldn’t finish the season as a starter because you headed to the bullpen in July. Did you have any regrets about that?

Looking at your success in last season, you didn’t give away as many walks, just 1.86 per nine innings. What do you owe this to?

You were undrafted in the rookie draft twice. The start of your baseball career wasn’t all smooth. Were you ever discouraged?

Rather than being shocked, I accepted the decision as that’s where my skills were at during that time. Thankfully, [after graduating college,] NC allowed me in as a developing player. Once I joined the professional league, I worked even harder.

Back in college, you switched your position from an infielder to a pitcher. What prompted this decision?

In high school, I usually played as shortstop. I was confident in my defense, but my batting was weak. Interestingly, when I was in my graduating class, our team didn’t have enough pitchers. Since there was a sidearm pitcher on our opposing team, I just tossed batting balls as sidearm and our manager said I was tossing them well. My control was alright. When we didn’t have enough pitchers, I played [as a pitcher]. It was fun because I’d never done it and I thought to myself I want to do it properly when I go to college. Right when I started college, I played as a pitcher.

Were there any specific reasons for choosing to be a sidearm pitcher?

To be an overhand pitcher, I didn’t have the speed. Since sidearm pitchers are rare and need to have control [in their pitches], I chose to become one. I wasn’t sure if it would be possible [to be a pitcher], but I also thought that if I prepared well for four years, then it could be possible.

Normally, I tend to throw a lot more change-ups because they’re good. But as I started the second half [of the season] as a bullpen, [catcher Yang] Eui-ji gave me a lot of signs for slider. Since my slider is better than when I was a starter, he told me to throw it with confidence. Once I trusted it, I saw good results. It probably wasn’t easy for the batters because I was throwing a slider, when they were expecting a change-up.

You’ve also added a curveball to your pitching arsenal. Did that help?

In 2018, I only had two types of breaking balls - change-up and slider. I thought that if I also added a curveball, then it might confuse the batters. I needed a big degree of curve in my breaking balls. I plan on practicing and using it more during games.

Looking at the stolen bases in the 2019 season, you didn’t allow that many, only seven. How did you manage it?

When there’s a fast player out on the base, I try not to lose my timing. When I get into my set position, I keep changing my tempo. I’ll pitch at the second count or pitch after counting to three. As I started doing that, the runners didn’t really run. If a runner on a first base gets to the second, that damages me but [if I give up] runs, then that damages the team. So I tried to give one less base.

Now, the fans recognize you and the club also has some expectations for you. How do you feel?

If I can’t meet up to the expectations, they will get disappointed, but I don’t think I’ll be able to play my game if I start thinking that. Once I get on the mound and try my best, I’m sure I’ll see good results. Rather than feeling overwhelmed [about the attention], I’ll just play like how I normally play.

What will you be focusing on at spring training?

It’s been about a year now, so there won’t be any changes in the big frame. Since I threw a lot of pitches last year, it’s important to get through the season without overusing [myself]. Last year, I tossed quite a number of pitches toward the batters rather than the strike zone, so I had a lot of beanballs. Personally, I want to have delicate control in my pitches like [the former major league pitcher] Greg Maddux, my personal favorite player.

Are you preparing for the season as a starter?

I think I’ll have to wait until I get to the United States [spring training site] to find that out. I’ll train for the position our manager wants me to.

What has been the most difficult time in your baseball career so far?

There are too many, but they weren’t too tough because I was able to get through them.

My goal is to improve a little more than where I was at last year. I have the same mindset every year, to play full-time without any injuries. The most important thing is to get in the starting entry for the opening game. Since our team is looking for a win, I’m trying to fulfill my role by helping them.