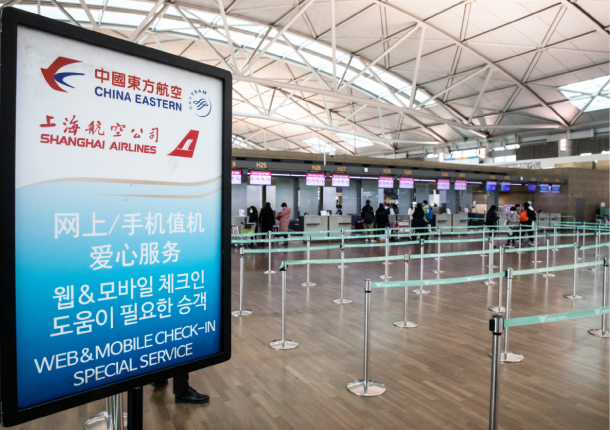 A check-in counter for Chinese airlines at Incheon International Airport is deserted Wednesday as Koreans worry about the spread of the Wuhan coronavirus. [NEWS1]

Korean airlines are shutting down flights to China.

Asiana Airlines announced Wednesday that it was suspending some flights to and from China as fears of the Wuhan coronavirus grew.

The second-largest full-service carrier in Korea announced in a statement Wednesday that it will suspend flight operations between Incheon and Guilin four times a week and an Incheon-Haikou route that operates two days a week, starting Feb. 1.

Starting Feb. 3, the carrier is suspending its Incheon to Changsha flights, which run four times a week.

Asiana said it will decide when to reopen the routes depending on the spread of the Wuhan coronavirus in the future.

Carriers around the world, such as United Airlines and Air Canada, have been canceling flights to the country or waiving alteration or cancellation fees. British Airways canceled all flights to China Wednesday, although not including Hong Kong.

Air Seoul was the first Korean carrier to shut down all China flights. The budget carrier affiliate of Asiana announced Tuesday it was suspending flights to Zhangjiajie and Linyi.

Korean Air has halted flights to Wuhan, the epicenter of the outbreak, through Friday, while low-cost carrier T’way Air postponed the launch of an Incheon-Wuhan route that was set for Jan. 21. T’way Air is considering changes to its six existing routes to Chinese cities currently in operation.

The coronavirus is already eating into revenues for local airliners that have opened up routes to China and some Southeast Asian countries.

According to the Ministry of Land, Infrastructure and Transport on Wednesday, the number of Korean airline passengers last year increased 5 percent on year to 12.3 billion - despite decreased demand on routes to Japan (because of diplomatic tensions) and Hong Kong (due to the pro-democracy protests). The ministry said demand for trips to China and Southeast Asia made up for those declines.

Routes to Chinese cities saw the greatest increase among all routes.