Schools advised to use ‘emergency management’

Schools advised to use ‘emergency management’ 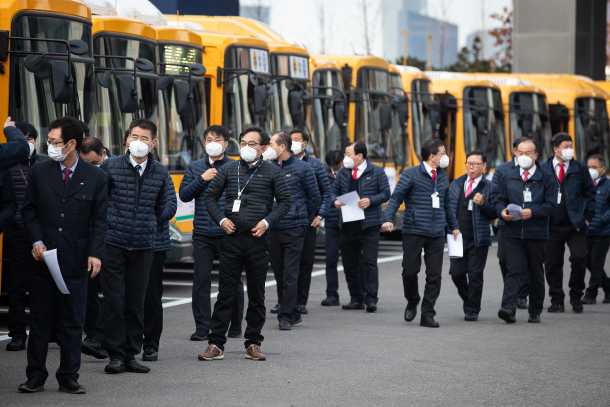 Bus drivers in masks at a parking lot in Yongsan District in central Seoul after the launch of new bus routes Wednesday, amid concerns about the spread of coronavirus. The new routes link tourist attractions in the new “green transport zones” that are aimed at lowering lower emissions. [NEWS1]

Education Minister Yoo Eun-hae urged Korean universities Wednesday to operate an “emergency management system” and communicate with the ministry around the clock to prevent the coronavirus from landing on domestic school campuses.

In a meeting with several university officials at the Government Complex in Sejong, Yoo advised schools to refrain from organizing large events such as freshmen orientations and make sure to isolate any student or faculty member who comes from Wuhan, Hubei Province, in central China for 14 days upon their arrival in Korea even if they don’t show any symptoms of the virus.

The incubation period of the virus is 14 days. Wuhan is the epicenter of the coronavirus outbreak, which has so far infected nearly 6,000 people in China and a handful of other countries. At least 132 people died as of Wednesday, all from China.

Korea has confirmed four cases so far, three from Korean men in their 50s and one from a Chinese tourist in her 30s. All tested positive for the virus shortly upon their arrival from Wuhan this month.

Wuhan has been placed under lockdown since last Thursday.

For students who had gone to Wuhan for their winter break before the lockdown, and are now stuck there, Yoo told Korean university officials Wednesday during the meeting to make sure schools allow those students to adjust their academic schedules once they’re able to come back.

Universities were also told to disinfect their dormitories.

Most universities are about to start their spring semester in early March, but foreign students normally arrive on school campuses earlier to settle into their accommodation, which is why local health authorities are taking extra caution.

Several universities who offer winter break courses to their students advised them not to come to school for a week if they had visited China, or wear masks in class. A spokesperson for Kyung Hee University said the school recently chose the former option.

An official at a university in Seoul who spoke on the condition of anonymity said his school was “nervously” awaiting some hundreds of Chinese students enrolled at the university to return next month following their Chinese Spring Festival holidays.

The holidays, which was originally planned to stretch from last Friday through today, was extended by three days till Sunday by the Chinese government in the aftermath of the virus outbreak.

As China’s death toll rises, some Koreans are urging the government to impose an entrance ban on all Chinese. A Blue House petition demanding such measures garnered more than 570,000 signatures by Wednesday in only a week since it was first uploaded on the Blue House website, and a group of some 30 people rallied outside the Blue House Wednesday afternoon to protest the arrival of Chinese nationals in Korea.