AI without data is the same as a bow without arrows

AI without data is the same as a bow without arrows 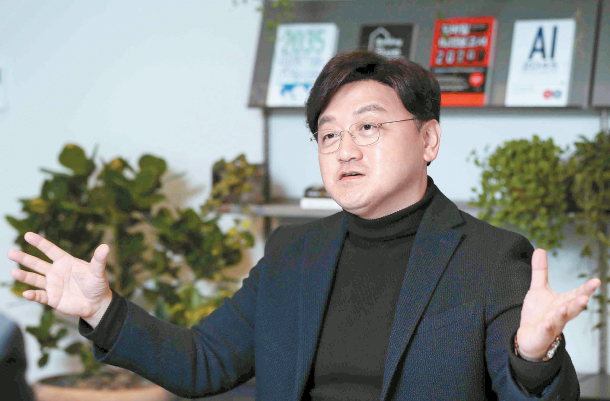 The White House hosted a summit last year on artificial intelligence (AI) in government, where 175 AI experts gathered nationwide. Japan announced in its AI development report 2019 that 250,000 AI experts would be trained a year. Followed by last year’s announcement to create 455 trillion won ($387 billion) of AI-related economic activity by 2030, the Korean government released a new strategy for the AI industry last month.

The age of AI is here. AI was the keyword of this year’s Consumer Electronics Show (CES) held in Las Vegas. Kakao launched a subsidiary in the AI industry last month called Kakao Enterprise with approximately 500 employees. “The next century will be defined by AI,” said Kim Beom-soo, the chairman of Kakao, Korea’s biggest messaging app. The JoongAng Ilbo sat down with Baek Sang-yeop, CEO of Kakao Enterprise, to discuss the status quo of Korea’s AI industry on Jan. 14 at Kakao’s office in Pangyo, Gyeonggi.

Q. Why do you think AI was such a hot topic at the CES show?

What do you think of AI robots replacing humans in Hollywood movies?

While watching the movie “The Avengers,” I was highly impressed with Jarvis, the AI assistant who can think and speak like a human. Since my English name is Andrew, I want to name my AI assistant Andrew Jr. and share my workload with it. His productivity will directly benefit the firm, society and the nation as a whole.

Isn’t studying facial expressions difficult to analyze? In the case of autonomous cars, how can they turn left where there is no signal?

Reading one’s expression to understand emotion is the biggest challenge in AI. Extreme emotions such as crying and laughing are easy to read. Awkward and subtle expressions can be easily misunderstood where AI cannot distinguish between true and false. So for autonomous cars, the trend is to designate specific roads for autonomous driving lanes where such ambiguity won’t be an issue.

What do you think about the passage of the three data bills (the Personal Information Protection Act, Information and Communications Network Act, and Credit Information Act)?

Before the bills were passed, it is no exaggeration that data utilization was bounded. Although specific rules need to be aligned, it is a great leap since we can now use non-identifiable data that can broaden our product’s intelligence.

How will you utilize the data?

I want to take Singapore’s smart national strategy as an example. In Singapore, the accumulated national data is applied to medical and product development fields. The passage of the three bills is just a start. I hope the country comes up with a policy that can create and activate a “data lake.” AI without data is like pulling a bow without an arrow.

Some see data collection as a double-edged sword. What do you think about the infringement of privacy?

Are you collaborating with other domestic AI companies?

Kakao and SK Telecom made 300 billion won worth of share swap deals last year. We are going to integrate our technologies and areas that we are specialized in to bring the synergy effect. For instance, if SK Telecom’s AI service Aria faces a problem, Kakao’s AI service Hey Kakao can help, and vice versa.

How do you rate Korea’s AI technology?

How does AI positively affect the domestic economy?

Our population is aging and shrinking. Growthists think that gross domestic product will decline and the younger generation will support the elderly. Not the AI developers. When I am in my 70s in 2030, Andrew Jr., the AI version of myself, can do my job so that I do not have to retire. It may sound utopian, but the elderly may maintain or even expand productivity.

Isn’t that too optimistic?

In Japan, they applied AI strategies to their aging and shrinking population. Trying not to miss the title in national leadership, defense leadership and academy leadership, the United States will continue developing AI. AI is a tool to increase productivity. Korea has an advantage in having excellent manufacturing bases related to AI chips such as Samsung and SK Hynix.

Is the AI industry facing a labor shortage?

There are quite a lot of people with talent. More than 50 percent of AI-related college graduates go abroad because of the salary and the working environment. However, in the long run, we should not view them as outflow but being fostered abroad in a better environment. Regardless, research centers and the AI community need to be established in Korea for these people to find a job or start a business in Korea. The state should step up and inject money, data and cooperation channels. Once the venture ecosystem is established, many entrepreneurs may come back from the United States to run their businesses in Korea.

The foreign media says China is hoarding AI and data science specialists. What do you think about this?

Once the data science’s influence and our corporate achievements are demonstrated, we will soon sense the labor shortage. Korean specialists tend to go to the United States rather than to China, but we should still keep an eye on China. At the national level, China is breaking the notion of privacy and greatly supporting AI development. I am worried about its destructive power.

Are there any regulatory issues regarding AI?

I want to talk more about policy rather than regulation. Embracive steps are needed. Innovators are forced to start small. It is hard for innovators to embrace the big, existing players. Embracing can be done by the ones with money, which means the first phase must come from the state. Once the state embraces using tax or the government budget, innovative firms who have succeeded can secondly embrace through income tax or innovation tax.

What advice would you give college students or job seekers interested in AI?

It is still not too late. Start with Python, the easiest programming language. We increasingly need experts and doctors who have a profound understanding of matrix, probability and statistics. Education is very important.