‘Time to Hunt’ is all chase, all the time

‘Time to Hunt’ is all chase, all the time 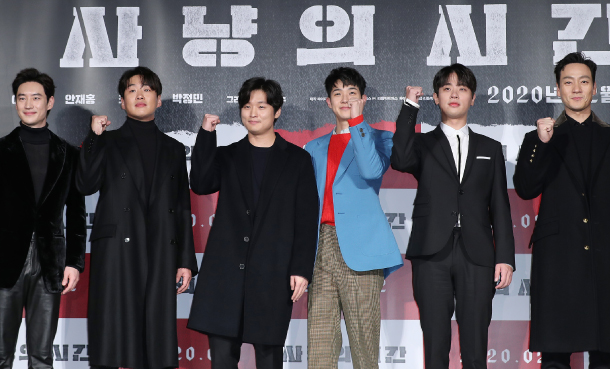 From left, actors Lee Je-hoon, Ahn Jae-hong, director Yoon Sung-hyun, actors Choi Woo-shik, Park Jung-min and Park Hae-soo pose at a press conference for their upcoming thriller, “Time to Hunt,” in eastern Seoul on Friday. The film is to be released later this month. [NEWS1]

The two words that popped up throughout a press event for the upcoming thriller “Time to Hunt” on Friday were “new” and “powerful.”

The thriller is set in a dystopian future in which four friends hope to start off fresh with a dangerous plan, but become targets of a mysterious yet deadly hunter named Han.

“Most Korean films are focused on the drama, the narrative of the story,” director Yoon said. “But as with Hollywood films that I’ve grown up with, such as ‘Jaws’ and ‘Duel’ by Steven Spielberg, the ‘Terminator’ series and ‘Mad Max: Fury Road,’ I wanted the entertainment of a simple chase rather than a more complicated narrative, characters or dialogue.”

This is Yoon’s second feature after “Bleak Night” (2011), which also starred Lee and Park Jung-min. Yoon’s first film received accolades for its realistic depiction of relationships among high school friends. The director admitted that after working on a drama, he wanted to make something entirely different.

Before the film hits local theaters, it has been invited to the 70th Berlin International Film Festival, which will be held from Feb. 20 to March 1.

The entire cast is expected to attend the Berlin screening except for Choi, who is still adjusting his schedule due to the ongoing production of “The Policeman’s Lineage.” Choi’s attendance of this year’s Academy Awards, in which his film “Parasite” is a contender, is still on hold as well.

“I already picked out tuxedos for both events. I very much hope that I can be there [for both],” Choi said.

The cast said that they went through physical transformations to fit into their respective roles.

“I tried to approach my character in a way that’s entirely different from how I used to do it before,” Ahn commented. “I bleached my hair and, with the help of makeup, tried to roughen up.”

“Another interesting point to look out for in our film is the portrayal of a subculture,” Yoon said. “Our characters have had quite bleak lives, growing up in city slums, and we implanted that subculture into the film. All of the graffiti shown in the film is done by the graffiti artist Beom Min, the music and the fashions have a hip-hop feel.”

Park Jung-min expressed his excitement with the film.

“I haven’t seen the complete film yet, but my expectations are growing higher over the film’s visual and sound effects,” Park said. “There are unique angles that [I] haven’t seen before. I was even surprised seeing brief clips of the film.”

“I think it’s rare to have an ensemble of youthful actors coming out in one film,” Lee said.

“It’s also a story about high-spirited, enthusiastic youths with so much energy, which, in my opinion, is unique for a local film.”