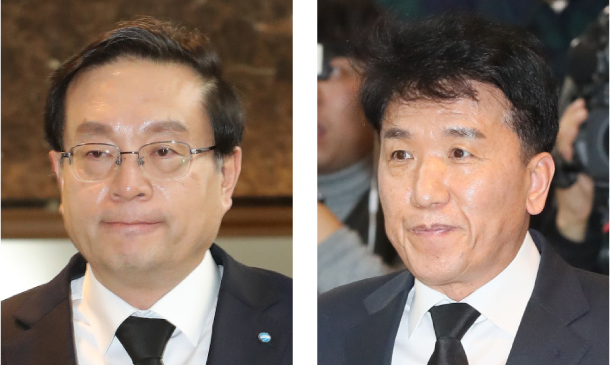 The Financial Supervisory Service (FSS) is set to issue reprimands that would prohibit leaders of two major financial groups from running for their positions again for at least three years. It may also fine the intuitions themselves.

The announcement, which was made Thursday, is related to an ongoing investigation into the misselling of high-risk derivative-linked funds (DLF) last year by Woori Financial Group and Hana Financial Group.

“The sanction committee held a total of three meetings considering the subjects in questions caused damage to numerous customers and incurred social criticism,” the FSS said in a statement after the meeting.

Six-month partial suspensions for Woori Bank and KEB Hana Bank have also been recommended in addition to a 20 billion won ($16.8 million) fine for each bank.

The punishments outlined come from the sanction committee of the FSS and need to be approved by FSS Chairman Yoon Seok-heun.

The committee argues that the two men violated the Act on Corporate Governance of Financial Companies, which requires the financial institutions to establish internal control standards to prevent high-risk investments from being sold to individuals.

Ham and Sohn had been expected to remain in their positions at their respective financial institutions.

Woori Financial Group Chairman Sohn was the sole candidate for his position, and a vote was to be held at the general meeting scheduled in March. If the sanction committee’s Thursday decision goes through, Sohn may no longer be allowed to hold that position for a number of years.

If the final approval of the sanction gets delayed until after the general meeting in March, Sohn will be able to serve another term. Even if the sanction gets imposed afterwards, the related law would allow the chairman to finish his remaining term.

The FSS held two meetings in January on the misselling scandal but was unable to reach a decision due to the complexity of the matter.

It blames the bank chiefs for having failed to monitor the high-risk investments and the selling of them to individual customers who lack expertise in the instruments. The banks refuted the claim saying that the leaders are not directly involved in the selling of the investment products.

They add that compensation plan for investors should be seen as mitigating factors.

Woori Bank and KEB Hana Bank started selling DLFs in the first half of last year. Each bank had sold approximately 400 billion won worth of the investment products, with KEB Hana selling to 400 clients and Woori to 600 clients.

The two banks are currently compensating the customers, returning 40 to 60 percentage of the amount lost.