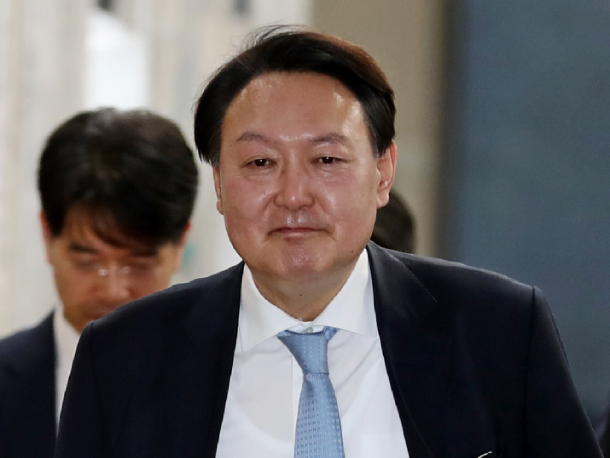 Prosecutor General Yoon Seok-youl is receiving massive public support to become the next president, a poll showed Friday, indicating that the top prosecutor is benefiting from the power struggle between the Moon Jae-in administration and the prosecution.

A daily newspaper, Segye Ilbo, released Friday the outcome of the R&R polling company survey it commissioned to mark its 31st anniversary.

According to the poll, conducted from Sunday till Tuesday on people over 18 years old from across the nation, former Prime Minister Lee Nak-yon was ranked as the best person to be the next president with a score of 32.2 percent.

Yoon was ranked second with 10.8 percent, and Liberty Korea Party (LKP) Chairman Hwang Kyo-ahn followed with 10.1 percent. Yoon was ahead of Hwang within the margin of error.

It remains to be seen if Yoon will actually start a political career. The prosecutor general’s two-year tenure is scheduled to end in July 2021.

Experts said the outcome of the poll is more of a reflection of the centrist voters’ support for the prosecution, which is at odds with the Justice Ministry over reform measures. It is also conducting investigations into the Blue House’s alleged abuse of power. “I don’t think Yoon will enter politics,” Choi Chang-ryul, a professor of political science at Yongin University was quoted as saying by the Segye Ilbo. “But the Blue House must pay careful attention to the public sentiment reflected in this poll. They should consider this as a warning sign.”

The ruling Democratic Party (DP) expressed its displeasure. “Talking about Yoon’s possible presidential candidacy itself is just outrageous,” said a member of the DP’s Supreme Council. “Are they insane to include an incumbent prosecutor general in the poll?”

Others, however, said the poll is sending a message. “A close associate of Yoon had once said the prosecutor general won’t be the end of his career,” a senior lawmaker of the DP said. “Yoon won’t mind being mentioned in the reports [as one of the most favored presidential candidates].”

The DP and the Blue House appeared to be burdened that Yoon is enjoying liberal voters’ support by pushing forward probes into the key members of the Moon administration ahead of the April 15 general elections. The Blue House remained tight-lipped although 13 people, including Ulsan Mayor Song Cheol-ho, a close friend of Moon, and former presidential secretaries, were indicted en masse Wednesday on charges of election law violations.

DP leaders also stopped attacks on Yoon after Floor Leader Lee In-young said, “We should let the government reform the prosecution and the National Assembly must do its jobs. We must stop a political debate on prosecutorial reform.”

“Yoon was appointed by President Moon, and many felt uncomfortable that the Blue House, administration and ruling party are fighting against him,” said a DP lawmaker. “Centrist voters could have seen the recent reshuffles of the prosecutors as an attempt to stop the prosecution’s investigations into the Blue House.”

The LKP is also baffled at the outcome that Hwang was behind Yoon. “We think this is temporary,” said LKP spokesman Kim Sung-won. “But if this trend continues, we need to consider him as a [potential rival].”

Meanwhile, Yoon ordered the prosecution to cease investigations into politicians by the end of January and resume them after the April general election, prosecution sources told the JoongAng Ilbo. Yoon reportedly told the senior officials of the Supreme Prosecutors’ Office to suspend the probes in order to avoid criticism that the prosecution influenced the election.

The prosecution, therefore, will resume the probe into Im Jong-seok, former presidential chief of staff, after the general election. Im was questioned by the prosecution for 11 hours on Thursday.

Im is a primary suspect of the Seoul Central District Prosecutors’ Office’s investigation into the allegations that the Blue House officials had masterminded a police probe to taint the reputation of then-Ulsan Mayor Kim Gi-hyeon in 2017 to help Moon’s friend Song win the post in 2018.

He was also suspected of having offered a CEO post at a public company to Song’s internal primary rival to award the nomination. The Supreme Prosecutors’ Office said it will hold a meeting on Feb. 10 with heads of 18 district offices and 59 public security departments from around the nation to discuss their strategy to crack down on election law violations ahead of the April 15 general election.