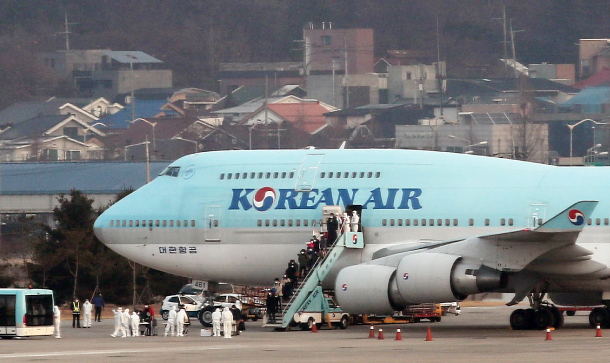 According to the Korea Centers for Disease Control and Prevention (KCDC), two of the five patients confirmed Thursday and Friday have been dubbed Patients No. 7 and 8. The other three have not been labeled yet.

Health officials said Patient No. 7 began showing symptoms on Sunday before building up a fever of up to 37.7 degrees Celsius (99.9 degrees Fahrenheit) on Wednesday.

Local health authorities said they classified the patient as a likely carrier of the virus and transferred him to a government-designated hospital on Wednesday. On Thursday, his test results were positive, and the patient is currently being treated at the Seoul Medical Center in northern Seoul, according to the KCDC.

The remaining two local transmissions are more of a mystery because authorities have kept details to a minimum.

But it is almost certain they are tertiary infections that go back to Patient No. 3, a 54-year-old Korean man who recently returned from Wuhan. He was the most heavily scrutinized by the government - and criticized by the public - for roaming around Seoul and nearby Ilsan, Gyeonggi, from Jan. 20 to 26.

On Jan. 22, Patient No. 3 shared a meal at a posh Korean restaurant in the district of Gangnam, southern Seoul, with a 56-year-old Korean man who became infected with the disease - and was labeled Patient No. 6 on Thursday. The restaurant has been forced to temporarily close for disinfection.

Taean’s local government shut down the day care center where the daughter of Patient No. 6 worked.

The designation gives the organization capabilities to push governments around the world to contain the disease and coordinate its containment.

WHO’s Director-General Tedros Adhanom Ghebreyesus said there were now 98 confirmed cases in 18 countries outside of China as of Thursday, and that the declaration was aimed at helping countries with weak publichealth systems prevent the spread of the virus. In China, where infections first emerged in Wuhan in December, officials confirmed the virus had infected 9,820 people so far, killing 213.

With signs that the virus is spreading locally, Korean President Moon Jae-in on Friday said his cabinet, led by Prime Minister Chung Sye-kyun, should mount an “exceptional response” to the epidemic in order to alleviate the concerns of the public.

While people infected with the new coronavirus may not show signs of illness for days, common symptoms include a fever, coughing, muscle pain, chills and difficulty breathing.