[TEST DRIVE] As Maserati goes electric, we take the classic GranTurismo for a spin

[TEST DRIVE] As Maserati goes electric, we take the classic GranTurismo for a spin 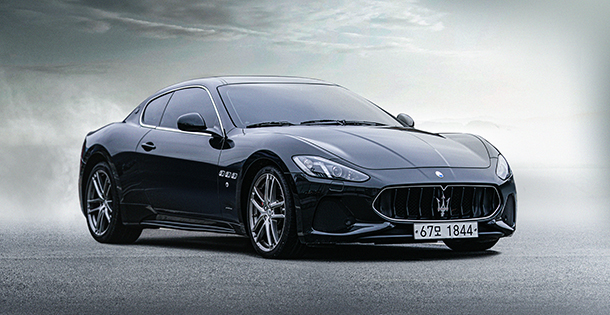 Photo of a 2018 Maserati GranTurismo during a test drive last month. Maserati terminated production of the model in November last year and is overhauling its factory in Moderna, Italy, to start developing electric sports cars. [JEON TAE-GYU]

When one chapter ends, another begins. That seems to be where we are in the Maserati story.

After 105 years, the Italian maker of iconic sports car is going electric. And it’s not just dipping its toe in the water. Maserati is diving in feet first.

The beginning of the end was marked with the last production runs of the GranTurismo and GranCabriolet, the mainstays of Maserati stable and my personal favorites.

On Nov. 11, 2019, the final GranTurismo Zeda was made, and an era came to a close. From there, the company started overhauling the plant at Moderna, Italy, and retrofitting the lines for electric vehicle production.

It will be making major announcements on the new products at the company’s MMXX event, which is scheduled for May.

The GranTurismo will live on in a way. The gasoline-powered roaring beauty may no longer be churned out at Moderna, but Maserati is working to prepare an electric sports car with the same name and in the same class.

Long before I started reviewing cars, well before I had test driven a Maserati, I knew the brand. I wasn’t much of a gearhead and didn’t even have a driver’s license, but I knew from a young age that Maseratis were great cars.

That impression was permanently seared into my mind a few years ago as I drove my beat-up Hyundai Elantra down a road in Sacramento and a Maserati raced by.

I am a fanboy to be sure, but I am here to give you an objective review. I’ll do my best.

I spent a couple of days last month driving the Sport edition of the latest Maserati GranTurismo around the peninsula. Turns out that I was the last person in the country to test drive the classic. 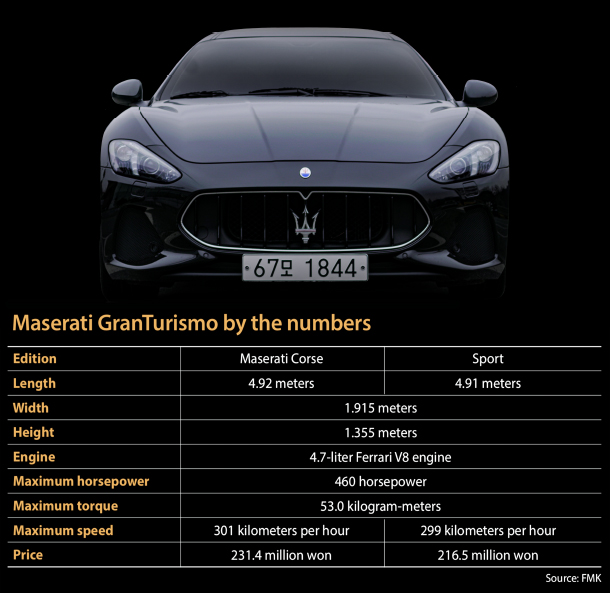 Some say that the GranTurismo appears old, stuck in the past and not so special. I disagree. Behold the iconic shark-nose with fade-in horizontal headlamps whirl-winding into the trident emblem, and the sense is one of timelessness - a design that transcends generations.

Coming in at 4.91 meters (16.1 feet) long, 1.92 meters wide and 1.36 meters high, the car looks sleek, strong and aerodynamic. I can only hope the stunning exterior is kept for the electrified version coming in 2021 and for the electric GranCabriolet scheduled for introduction a year later.

But that’s design - important but perhaps secondary to the real worry among Maserati otaku. The engine is what counts, and I, like many others, am concerned that Maserati will lose the plot as it turns the page. The 4.7-liter Ferrari V8 engine and ZF six-speed automatic transmission are central to the story.

That pure masterpiece of an engine is one of the main reasons for the Italian machine winning such a large global fan base in the first place, and if that can’t be maintained, I don’t know what will keep buyers excited.

Back to the present, the car did everything you would expect given the aforementioned engine and the stem-to-stern engineering following in the same tradition. From acceleration to braking, I felt in command.

With 460 ponies under the hood, I was able to get from point A to point B and then some.

Exhilaration is all but guaranteed in the Sports mode, and unexpected tranquility hit me when driving in Increase Control & Efficiency (ICE) mode. The Normal driving mode still met expectations, reminding me of the fact that the GranTurismo is rated at 53.0 kilogram-meters (383.3 pound-feet) in torque and can travel as fast as 299 kilometers (185.79 miles) per hour.

If I had found a drag strip, I would have tested whether the GranTurismo could actually reach 100 kilometers per hour in 4.8 seconds as advertised.

Even at high speeds, the ride was remarkably smooth. The leather sports seat seemed to absorb all the shocks and the shakes as I slalomed to and fro. Skyhook suspension made the ride especially comfy, as I never once felt nauseous when driving like there’s no tomorrow.

Checking the time with the traditional Maserati analogue clock in the center was a pleasure, which I hope remains in place even after everything’s upgraded in the electric version.

I do hope they retire a few of the features when the electric GranTurismo is made available next year. An analog speedometer? Maybe some dig the retro-ness of it, but enough is enough.

Needless to say, the infotainment system needs a complete rethink if Maserati expects to keep up with the pack in Korea.

Android Auto and Apple CarPlay are supported, but the system is outdated, working through a yesteryear 8.4-inch display and way too slow. You expect more from a car that costs 216.5 million won ($181,700).

As the sun set on Maserati’s gasoline-era, nostalgia is kicking in. I hope the sports car maker will maintain enough of the GranTurismo essence as it goes electric. But I also hope it puts the past behind it when it designs the infotainment system for the cars of the future.