Churches, universities wrestle with the illness

Churches, universities wrestle with the illness 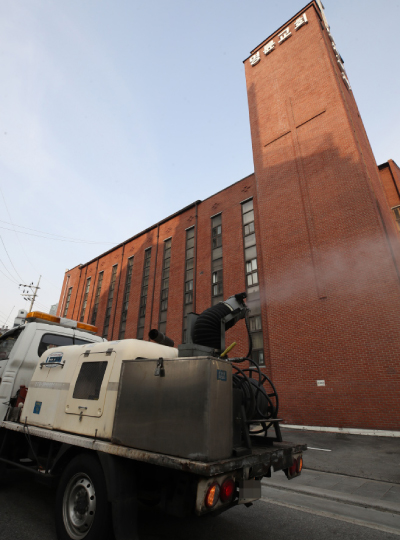 The Myeongryun Church in Jongno District, central Seoul, is disinfected on Sunday morning after it was confirmed that Korea’s Patient No. 6 visited the church on Jan. 26. The church canceled its Sunday service and temporarily closed the building amid worries over the spread of the virus. [YONHAP]

Churches and universities are being heavily affected by the spread of the Wuhan coronavirus.

The Myeongryun Church in Jongno District, central Seoul, on Sunday canceled services and temporarily closed after it was confirmed that Korea’s Patient No. 6 visited on Jan. 26.

According to the church, it received over 300 calls from its congregation on Saturday night. Eventually, it decided to temporarily close the building and uploaded a video of a sermon on its website instead of holding a Sunday service.

“Although the church building had been disinfected Friday night, we decided to close the church for a while in order to regain people’s faith,” said a spokesperson for the church.

The Sarang Community Church in Seocho District, southern Seoul, recommended people who visited China within 14 days or who were experiencing symptoms to “stay at home and have worship through Youtube videos.” It also told churchgoers to wear masks during services.

Lots of religious assemblies were canceled because of the coronavirus. “WeLove Fiesta in Seoul,” which was scheduled to be held in Jamsil Students’ Gymnasium in southern Seoul last Thursday, was canceled. About 5,000 people were supposed to participate.

The Bogum Art Mission missionary group canceled a concert planned for the Seoul Rehabilitation Hospital in western Seoul on Jan. 28.

On Sunday, Jeonbuk National University in North Jeolla canceled a ceremony for new students scheduled for Feb. 18 and 19.

An orientation for freshmen and transfer students on the same day was postponed indefinitely. A graduation ceremony on Feb. 21 will be held, but the number of participants, which originally planned to be over 1,000, will be limited to 100.

Suseong University in Daegu canceled a graduation ceremony that was planned for this Friday. According to the university, it will lend students graduation caps and gowns from Feb. 6 to Feb. 14 to allow them to take pictures with their friends and families.

Yonsei University’s Wonju Campus in Gangwon canceled an orientation for transfer students on Tuesday. According to the university, it suggested Chinese students already here to go into quarantine and other students to delay their flights to Korea.