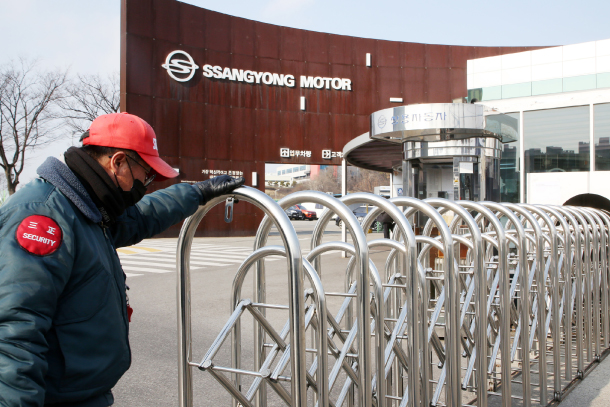 SsangYong Motor’s factory in Pyeongtaek, Gyeonggi, is closed on Tuesday after the automaker decided to suspend its operation through next Wednesday in the wake of the coronavirus outbreak. [YONHAP]

Hyundai Motor suspended two production lines in Ulsan Tuesday and plans to halt all lines in Korea temporarily on a staggered schedule due to a shortage of parts caused by the coronavirus outbreak from China.

Hyundai Motor confirmed that one of two production lines in Factory 5 in Ulsan and one line in Factory 4 were halted on Tuesday. Of the company’s five plants in Ulsan, Factory 5 manufactures the carmaker’s high-end models - the Genesis G90, G80 and G70 - while Factory 4 makes Palisade SUVs and Porter trucks.

The plant in Asan, South Chungcheong, will be shut down Friday and the one in Jeonju, North Jeolla, on Thursday.

The company’s management and union agreed on the suspensions during a Tuesday meeting.

“We set the time frame based on the assumption that Chinese factories will start operating next week, following the government’s order to extend the Lunar New Year holidays to Feb. 9,” said a spokesperson for Hyundai Motor.

“Even if the holidays are extended, we believe we can find a way around by importing parts from Southeast Asia,” he said.

One serious shortage involves wiring harnesses, which refers to a bundle of electric wires inside a vehicle.

Hyundai Motor Group has three suppliers of wiring harnesses, all headquartered in Korea. They all have production in China.

The decision follows a similar move by SsangYong Motor, which decided to close its factory in Pyeongtaek, Gyeonggi, from yesterday to next Wednesday.

Korean Air, the country’s top airline, closed down more routes to China for March. It suspended 20 routes, or 67 percent of all the Chinese routes it was operating in January.

Asiana Airlines has suspended four routes - between Incheon and Guilin, Haikou and Changsha and between Busan and Guangzhou - and reduced the number of flights on eight routes connecting Korea with Beijing, Shanghai and Shenzhen.

The parts disruption from China isn’t likely to pose a significant threat to smartphone manufacturing by Samsung Electronics and LG Electronics because they moved their key smartphone production lines to Southeast Asian countries in recent years.

“We are not in an emergency state because we are not heavily dependent on parts made in China,” a spokesperson for Samsung Electronics said.

“Samsung has diversified the locations of production lines, so the outbreak doesn’t really impact our production.”

Still, the company will not be completely spared from any impact.

It announced that the company’s flagship Experience Store in Shanghai shut down temporarily because of the virus. As for semiconductors, Korean chipmakers - Samsung and SK hynix - remain relatively unaffected.

“In terms of DRAM suppliers, only SK hynix’s production base in Wuxi is located in China, and since it is far away from Wuhan, it has not been directly impacted by the outbreak,” a report from TrendForce, market tracker DRAMeXchange’s research division, said.

“Samsung’s Xi’an production base is the center of this year’s expansion,” the report continued. “According to TrendForce’s investigation, since the locations of both bases are less affected by the epidemic, labor will resume work on Feb. 3 according to the Chinese government announcement, and the business will operate as usual.”

Other display and battery makers are taking cues from the Chinese government.

Two plants run by LG Display in Nanjing are scheduled to resume operation next Monday, and the same goes for LG Chem’s factory in Nanjing.

SK Innovation will also restart operations at its plants in Changzhou and Yancheng next Monday while Samsung SDI, a battery-making affiliate of Samsung, did not close its factory in Tianjin.

Major conglomerates including Samsung, LG and SK have told employees to cancel business trips to China and brought some employees in China home to Korea.