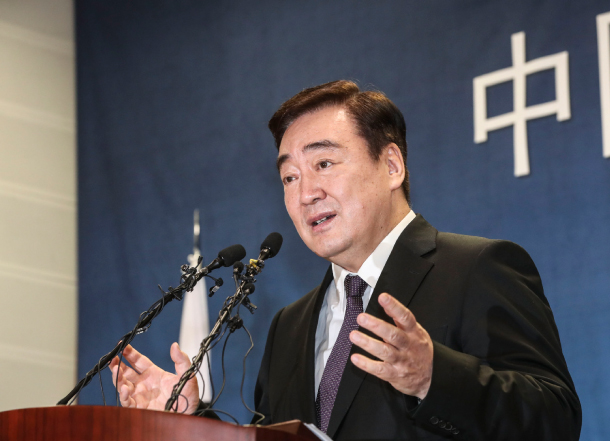 China’s new ambassador to Seoul, Xing Haiming, warned countries against taking measures that “unnecessarily interfere” with international trade and travel as the entire world tries to stop the coronavirus outbreak.

Xing said in a Tuesday press conference at the Chinese Embassy in Myeong-dong, central Seoul, that “related countries need to make a scientific decision” based on recommendations by the global health authority, the World Health Organization (WHO).

Just days after he assumed his post as the top Chinese diplomat to Korea, Xing held his first press conference to brief reporters on steps Beijing is taking to combat the spread of the deadly coronavirus that originated in Wuhan, the capital of Hubei Province.

The Korean government on the same day implemented a travel ban on foreigners who visited China’s Hubei Province in the past 14 days, following other countries trying to prevent the spread of the virus. Korea also temporarily suspended visa-free entry for foreign visitors to its southern Jeju Island.

In a press conference in Geneva last Friday, WHO Director-General Tedros Adhanom Ghebreyesus said that “there is no reason for measures that unnecessarily interfere with international travel and trade.”

Ghebreyesus called on “all countries to implement decisions that are evidence-based and consistent,” and said that the WHO “doesn’t recommend limiting trade and movement” at the moment.

Xing recognized the WHO as the “most scientific, authoritative organization” on health matters, adding China will work with the WHO and countries across the world on public health issues.

The ambassador also expressed gratitude for support from the Korean government, which recently offered $5 million in emergency aid to help combat the virus, including private sector donations of 2 million face masks and 200,000 sets of protective clothing and eyewear.

“China and Korea are friendly neighbors and are closely connected to each other,” said Xing, “and need to further mutually understand and support each other.”

He added, “The Korean government and figures from various circles are actively supporting the Chinese people. China expresses its deep gratitude for this, and the Chinese people will never forget the warm feelings.”

He added that China has supported Korean nationals in the Wuhan region. Over 700 Koreans from the Wuhan area were evacuated through chartered flights last week.

The virus has killed more than 420 people with over 20,000 confirmed cases in China alone and 16 cases in Korea.

Xing noted that 632 people in China have recovered from the illness and have been released.

The ambassador also noted that after the severe acute respiratory syndrome, or SARS, epidemic in 2003, Korean President Roh Moo-hyun was the first foreign leader to make a state visit to China in July of that year.

He also noted that in June 2015, after an outbreak of Middle East respiratory syndrome, or MERS, Zhang Dejiang, a former chairman of the Standing Committee of the National People’s Congress, made a visit to Seoul.

Xing, a career diplomat and Korean Peninsula affairs expert, previously served as ambassador to Mongolia. He has served in both the Chinese Embassy in Pyongyang and Seoul and is fluent in Korean.

It is unusual for an ambassador to hold a press conference before presenting credentials to the Korean president.

When asked to remark on Xing’s remarks urging countries to abide by WHO recommendations, Kim In-chul, spokesman for the Korean Ministry of Foreign Affairs, in a briefing Tuesday said, “Korea and China have been closely communicating and will continue to do so in order to overcome the situation. If there are necessary areas, we plan to actively cooperate and coordinate.”

As of Tuesday evening, there had been no cases of visitors being denied entry.

Domestically, there have been calls for more extreme measures such as an entry ban on foreigners who have visited any part of China or raising the travel advisory level to a withdrawal recommendation for all of mainland China, but Seoul has been taking into consideration relations with Beijing.

The Korean government had been anticipating a visit by Chinese President Xi Jinping to Seoul for the first time in six years in the first half of the year. Han Jung-woo, a Blue House deputy spokesman, denied a local report Tuesday stating that Xi’s visit has been postponed to June from March or April because of the coronavirus, pointing out that a clear date has not yet been set.

“The Blue House said at the end of last year that President Xi will visit Korea in the first half of this year,” said Han in a briefing. “We are still discussing the specific dates.”

When asked what to construe of Xing’s remarks, a Blue House official told reporters, “It is to our understanding that the Chinese ambassador said that we need to cooperate closely to resolve this issue, and it is important to understand it in the context of the larger picture. China is our largest trade partner, and at the same time, communication and close cooperation is needed to resolve this problem.”