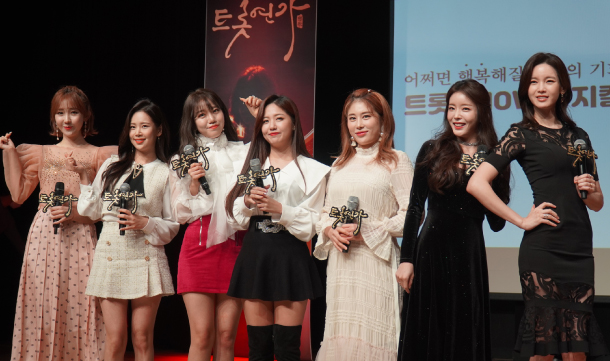 Korea’s nearly century-old music genre trot is no longer just for old folks. As new trot stars have emerged through singing competition shows, younger Koreans are now adding trot songs to their playlists. A musical has also been produced, telling the story of how a wannabe trot singer becomes famous overnight after appearing in a singing competition on TV. The producer, Think Entertainment, together with the cast, which includes Jeong Ga-eun, Jeong Da-kyung, Hong Kyung-min, Hong Rok-gi and many more, held a press conference on Wednesday at Ilchi Art Hall in southern Seoul to introduce the musical that will kick off on March 12 at the Woori Art Hall inside the Olympic Park in southern Seoul. Above, the cast poses for photos after the press event. From left is: Ha Yoo-bi, Kang Ye-seul, Kim Hee-jin, Jeong Da-kyung, Kim So-yoo, Park Seong-yeon and Jeong Ga-eun. [THINK ENTERTAINMENT]