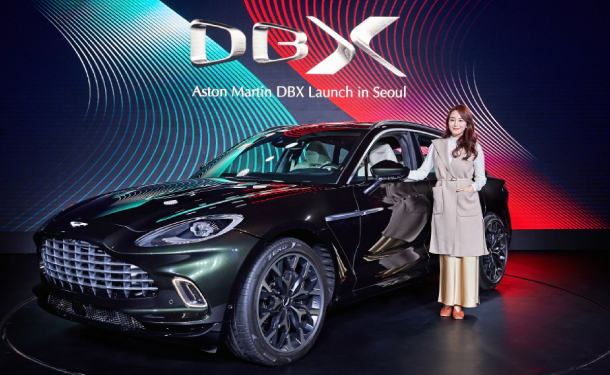 Aston Martin, the storied British sports car maker, rolled out its SUV in Korea to compete with offerings from Lamborghini and Rolls-Royce.

The DBX, which was introduced in the home market last year, is the company’s first foray into the segment. It was developed under Aston Martin’s “Second Century Plan,” which was announced in 2015.

The automaker said the DBX, priced at 248 million won ($208,500), has a superior sports car-like design and dynamic performance while maintaining practicality, like many of Aston Martins found in the Bond 007 series.

The DBX - equipped with the 4-liter (1-gallon), twin-turbocharged V8 engine and nine-speed transmission - is rated at 557.6 horsepower and 71.38 kilogram-meters in torque.

Aston Martin used bonded aluminum technology to reduce the weight of the DBX, which weighs in at 2,245 kilograms (4,950 pounds). The automaker has been using the same technology in the manufacturing of sports car models.

All DBXs will be made in Aston Martin’s manufacturing facility at St Athan, South Wales, Britain.

The luxury SUV is 5.04 meters (16.5 feet) in length, 2.22 meters in width and 1.68 meters in height. It has 632 liters of trunk space, which can also be enlarged by folding down the back seats. Local deliveries will start in June.

The Aston Martin SUV is expected to compete with the Lamborghini Urus, Bentley Bentayga and Rolls-Royce Cullinan in the local market.

Luxury cars have been gaining popularity among Koreans even though the economy is weak. Sales of cars priced above 300 million won almost tripled from 2018 levels to 360 units last year.