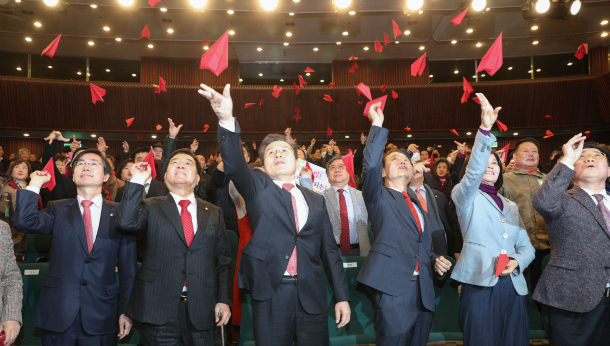 Leaders of the Liberty Korea Party (LKP) celebrate the foundation of the Future Korea Party, the LKP’s satellite political party, in the National Assembly on Thursday. [YONHAP]

The Future Korea Party held its launch ceremony and named Rep. Han Sun-kyo, a four-term lawmaker who recently left the LKP for the satellite party project, as its new chairman. Reps. Kim Sung-chan and Cho Hoon-hyun, who also left the LKP to join the new party, were named as members of the Supreme Council. The three lawmakers said they won’t run in the April general elections.

“The three leaders will prepare for the nomination process to create a list of proportional representative candidates,” said a party official.

LKP Chairman Hwang Kyo-ahn attended the launch ceremony of the satellite party. “The Future Korea Party is the advance guard of the liberal democratic forces that are faithful to the grand cause to stop the Moon Jae-in administration,” he said. “The Future Korea Party is a legitimate countermeasure against the unlawful revision of the election system in violation of constitutional governance.”

After the ruling Democratic Party (DP) and its legislative allies rammed through an election law revision bill last year, introducing a new calculation method for proportional representation, the LKP, which vehemently opposed the reform, proclaimed it would create a separate satellite party to exploit the new rules.

“Because they already declared that they won’t play a fair game, we must use all possible means to save this country,” Hwang said. “We must win the general election and change the election law again.” Chairman Han of the new party said he wants to redefine the image of the conservatives. “Parties in Europe are led by politicians in their 30s and 40s,” he said. “We will recruit young, talented professionals and let them work in the legislature without the burden of taking care of constituencies.”

The party said it will recruit at least five lawmakers among the LKP representatives who are not seeking reelection by Feb. 13. By March 27, the deadline of the candidate registration for the general election, more lawmakers from the LKP will change their party affiliations to the Future Korea Party to give it the status of a negotiation group.

If the new party has more than 20 lawmakers based on the plan, the Future Korea Party will be the second largest political party that is fielding proportional candidates after the DP. It, therefore, will be able to be ranked second on the ballot for the proportional representation election, high enough to attract the voters’ attentions. The new party, if it has at least five lawmakers, will also receive a state subsidy when the quarterly payment is distributed later this month.

The DP strongly criticized the launch of the LKP’s satellite party. “I am extremely devastated to see this political reality,” said Rep. Lee In-young, floor leader of the DP.

Lee said now is not the time to spend energy on the election because of the worsening outbreak of the coronavirus. “No political mission is above the people’s safety,” he said. “The LKP is only concentrating its energy to criticize the government.”

Other DP leaders said the Future Korea Party is an embarrassment. “This is a fake party,” said Rep. Park Kwang-on. “The people won’t forgive them.”