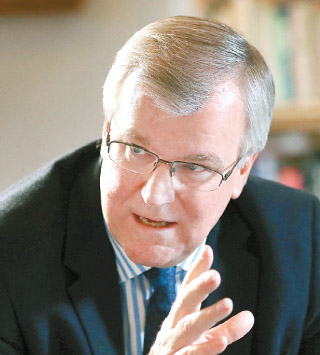 Simon Smith, the ambassador of the United Kingdom to Korea, called Brexit a new opportunity for Korean companies and people in an interview Tuesday following Britain’s exit from the European Union at the end of last month.

“As far as many aspects of our relationship with Korea are concerned, there is absolutely no change,” assured Smith sitting for an interview with the JoongAng Ilbo at the British Embassy in central Seoul. “One of the reasons for that is in terms of what governs our trading relationship with Korea. Things simply stay the same during what is known as the implementation period which lasts from now until at the latest the end of December this year. During that period, Britain will be regarded by the European Union as if it were still a member of the EU, and to that extent, we will remain covered by the EU-Korea free trade arrangement (FTA).”

Britain formally left the EU on Jan. 31, after a long and arduous process following the June 2016 referendum, in which 52 percent of British people voted to leave the EU and 48 percent voted to stay. But uncertainties still remain including the possibility of a no-deal Brexit.

“Whether you like Brexit or not, it is a historic day,” said Smith. “And it’s historic because for a great many people, they will have no memory whatsoever of Britain being outside the European Union.”

He added, “From my perspective, just on a personal level as an ambassador, it’s an entirely new experience for me to be representing my country, not as a country of the European Union. The different changes won’t happen right now. But it does put new challenges on all of us.”

Korea and Britain signed a continuity FTA with Korea in August 2019, allowing their businesses to keep trading freely after Brexit.

He added, “I think we can be confident that… even beyond there, there will be no minuses for Korean consumers.”

Smith pointed out, “We will need to rise to the challenge of expressing our perspectives in a way that inspires people and encourages our international partners across the world as Britain and not as a part of the EU to join us in what we are doing to try to make the world a more prosperous and safer place.”

On priorities for Britain, Smith said, “We think there is nothing more important right now than effective action on climate change,” adding that Britain will host the 26th session of the Conference of the Parties, or COP26, in Glasgow in November.

He also addressed the popularity of Korean football star Son Heung-min, who plays for Tottenham Hotspur, and said regardless of Brexit, “Son Heung-min will clearly still play for Tottenham whatever Britain’s status with the European Union is.”

He also addressed how Son recently got caught up in racism over the coronavirus outbreak and said the British government condemns any such discrimination.

Smith said, “For Koreans of course he is a big star, but actually, he is a big star in his own right. He is really one of the most outstanding players in the league right now. None of that changes.”

Q. What effect does Brexit have on Korea-Britain relations?

A. In the immediate term, nothing changes. In terms of the most important thing that governs the trade relationship between Britain and Korea, we carry on as we did before Jan. 31. The reason for that is that we enter into the so-called implementation period, this transition period which will last at a maximum to the end of this year. During that implementation period, the European Union will treat the U.K. as if it were a member of the European Union for trade purposes, and the U.K. remains a party to the EU-Korea free trade agreement. In that sense, in really significant areas of life, for the time, absolutely nothing changes.

How does Britain regard the finalization of the divorce from the EU?

This is something which has divided people in the United Kingdom. There is no denying that. Take as your starting point the referendum result, 52 percent to 48 percent - that already tells you this is not a question on which there was overwhelming support and it certainly tells you there was not overwhelming opposition to it either.

I think it’s a very exciting time, and it comes with some degree of certainty that we did not have until late last year… There is sort of a positive uncertainty which is now taking over from the negative uncertainty.

There is still a possibility that there may be a no-deal situation?

You can’t rule out that possibility, but I think that the British government’s approach to this now will be a very determined one to say we have a clear task in front of us: It’s to conclude our negotiation with the EU by the end of this year. Let’s get on and do that and let’s not think too much about why it might not happen because we are convinced it will happen. It’s time to get on with it.

Britain recently granted China’s Huawei a limited role in Britain’s 5G mobile network amid attempts by the United States to exclude the Chinese telecoms giant from the West’s next-generation communication.

We made that decision on the basis of a very, very deep analysis on the potential risks. We made it on the basis of a very thorough analysis of what our technological needs were, and I think we are very confident that we have come out with a decision that will do two things. It will make sure that we can continue the updating and readiness of our infrastructure for 5G, at the same time as assuring ourselves that all the potential security questions in relation to the decision are satisfactorily answered.