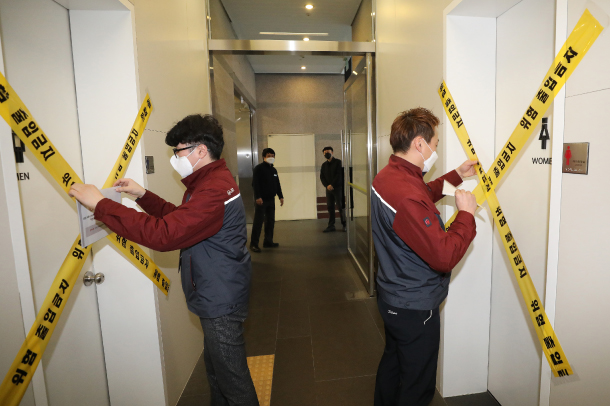 GS Homeshopping staffers shut down the company headquarters in Yeongdeungpo District, western Seoul, Thursday. The decision came after one employee was confirmed to be Patient No. 20. The network decided to close the building for three days through Saturday evening. [NEWS1]

GS Homeshopping closed down its headquarters from Thursday through Saturday and switched all its programming to reruns after one of its staff was infected with the Wuhan coronavirus.

This is the first time a disease outbreak shut down an entire company.

The home shopping channel announced in a press release Thursday that its headquarters in Yeongdeungpo District, western Seoul, went into complete shutdown starting from 1 p.m. and through Saturday at 6 a.m.

“During this period, our broadcast channel will be sustained through reruns,” the company said. GS staff will work at home or be offered paid leave if their jobs can’t be done remotely.

GS Homeshopping is one of Korea’s largest cable channels. Normally, it broadcasts infomercials live from 6 a.m. to 2 p.m. and uses reruns from late afternoon through dawn.

The staffer in question is Patient No. 20 who was confirmed infected with the Wuhan coronavirus late Wednesday night after a second test. A 41-year-old woman, Patient No. 20 is a relative of Patient No. 15 and lives in the same building in Suwon. An earlier test came out negative on Jan. 31, but the patient opted for another test Wednesday after experiencing throat pain.

GS said Patient No. 20 “had been staying at home since Jan. 31, when Patient No.15 was showing symptoms of the coronavirus.”

Staffers who work closely with Patient No. 20 were asked to stay at home for 14 days, the incubation period for the illness, starting Jan. 31.

Local media have reported unease among GS Homeshopping staff, who thought the company was slow to shut down. According to a GS spokesman, the company received notice of Patient. 20’s diagnosis at midnight on Wednesday. Around 500 GS staffers work at the headquarters, which also has a day care center that accepted children Thursday morning.

“We will take preventive measures like thoroughly disinfecting the building and keep a close eye on employees for symptoms,” the company said in a statement.

The Gwangju Mail Center also closed down Tuesday after one of its staffers was suspected to be infected. Patient No. 22 was confirmed Wednesday night. His sister is Patient No. 16, and the two siblings visited their mother’s house in Naju, South Jeolla, over the Lunar New Year holiday.

Unlike post offices, mail centers are in charge of grouping mail and packages before they are delivered to regional offices. They are not visited by members of the public. Nonetheless the mail center made the decision to close “to prevent a possible spread and for staff safety.”

The measure will impact more than 100 deliverymen who are not permanently hired by the mail center and not eligible for paid leave.

On Thursday, Hyundai Premium Outlet’s Songdo branch in Incheon became the latest brick-and-mortar store that voluntarily closed after the visit of a coronavirus patient.

“We received notice from authorities that Patient No. 19 visited our store around 4:30 p.m. on Jan. 1,” Hyundai said in a statement. “We will resume operations after discussing it with public health authorities.”