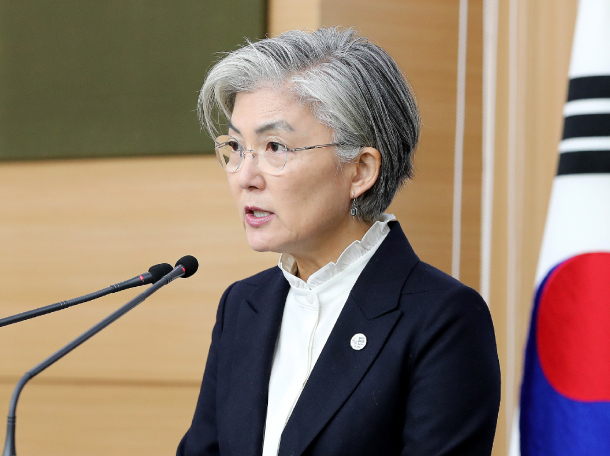 Korean Foreign Minister Kang Kyung-wha said Thursday that additional measures to curb the new coronavirus outbreak such as further travel restrictions on visitors from China will be reviewed taking into consideration World Health Organization (WHO) recommendations and the global trend.

“The government is conducting interagency consultations and continuously monitoring the situation taking into consideration comprehensively the spread of the virus within China, global trends and domestic quarantine efforts,” said Kang in a press conference at the Foreign Ministry in central Seoul. “If necessary, we will review additional measures.”

She addressed domestic concerns that Korea needs to take more stringent measures to curb the spread of the virus and expand travel restrictions to cover visitors from all of mainland China.

Korea since Tuesday barred the entry of all foreigners who recently visited China’s Hubei Province, the epicenter of the coronavirus outbreak.

“Protection of our people is the top priority task,” said Kang, “but I believe we need to review the situation taking into consideration overall matters such as WHO recommendations, the effectiveness of such measures should they be taken, along with the global trend.”

New Chinese Ambassador Xing Haiming in a press conference Tuesday urged countries to make a “scientific decision” based on WHO recommendations against unnecessary interference in travel and trade.

The timing of his remarks drew some controversy as it came on the same day of Korea’s travel restrictions on foreigners who visited Hubei Province and even before the ambassador, who took his post just last week, formally presented his credentials to the president.

However, Kang brushed off such concerns and noted that the Korean Foreign Ministry has already received a copy of the Chinese ambassador’s credentials and that Xing has also met with Foreign Ministry officials and that none of his actions go against the Vienna Convention on Diplomatic Relations.

She added, “To my knowledge, the press conference was held in a situation where many reporters were curious about Chinese measures” to combat the coronavirus.

Kang during the press conference outlined Seoul’s plans in diplomacy in the new year amid tough negotiations to renew a defense cost-sharing agreement with the United States, an unresolved spat centered on trade and history issues with Japan and stalled negotiations on North Korea’s denuclearization.

Her ministry, she said, will continue to support advancing inter-Korean relations alongside the development of North-U.S. relations “based on close cooperation between South Korea and the United States.”

The Korean government has pushed for individual tours to North Korea, and Kang said that while there hasn’t been any progress since the North-U.S. working-level talks in Stockholm last October, South Korea will “continue to do its utmost for progress in the Korean Peninsula peace process.”

Kang noted that a proposed visit by Chinese President Xi Jinping to Seoul in the first half of the year is still possible.

There has been speculation that the trip by Xi could be delayed because of the virus outbreak, but Kang said, “Discussions for a visit by President Xi to Korea in the first half of the year are still valid.”

Korea will also host a trilateral summit with Japan and China this year, which would mean a visit from Chinese Premier Li Keqiang.

Last week, 701 Koreans were evacuated from Wuhan, the epicenter of the virus outbreak, and Kang added, “We will continue to closely communicate with China for a speedy end to the situation and work toward important diplomatic schedules between Korea and China to proceed without any issues.”

Kim congratulated Xing on taking his post, offered condolences to the victims of the coronavirus in China and requested for cooperation to protect the Koreans that are still in China, according to the ministry.

Xing thanked Korea for its support and the two sides agreed to develop relations and overcome the coronavirus situation through close cooperation.

On Jan. 30, Korea decided to provide $5 million in emergency assistance to China, saying that its “private and public sectors are united in helping the people of China” and stressing the “deep bond” of the people and “friendly relations” between the two countries.

The Korean government also pledged a total of $300,000 to several cities close to Wuhan, including Chongqing.

The Chinese Foreign Ministry on Wednesday thanked 21 countries who have provided support to China amid the coronavirus outbreak and mentioned South Korea first on a list that also includes Japan, Thailand, Malaysia, Germany, Britain, France and Australia.

“The donations speak volumes of their deep compassion,” said Hua Chunying, spokesperson of the Chinese Foreign Ministry in a briefing Wednesday. “A friend in need is a friend indeed.”

However, Hua also addressed the travel restrictions taken by countries and said, “We understand and respect their appropriate responses such as border screening and quarantine measures on Chinese travelers. At the same time, some countries have overreacted with excessive measures, which clearly run counter to WHO recommendations.”

She urged countries to “assess the epidemic situation in an objective, fair, calm and rational manner” and said “measures they take should be in line with WHO recommendations and not exceed reasonable levels to avoid affecting normal personnel exchanges and practical cooperation.”

Sylvie Briand, director of the World Health Organization’s Infectious Hazards Management Department, said in a press conference in Geneva on Tuesday that the current outbreak does not constitute as a pandemic.

Virus cases have been confirmed in 24 countries other than China so far.