An end to the status quo?

An end to the status quo? 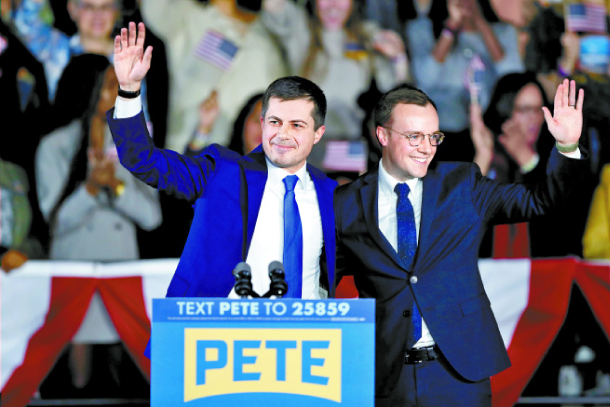 PARK HYEON-YOUNG
The author is a Washington correspondent of the JoongAng Ilbo.

On Feb. 3, the 66th precinct caucus was held at Abraham Lincoln High School in Des Moines to select a Democratic presidential candidate. Supporters were sitting behind banners with the candidates’ names on. You could tell that Pete Buttigieg had the most number of people. In the first poll, 97 of the 376 participants chose Buttigieg, followed by Bernie Sanders with 92 votes and Joe Biden with 57. With 97 percent of the results in, Buttigieg is leading the race in the state, giving him a head start in the presidential race.

His supporters have something in common. They were gray-haired middle-aged voters. It broke the conventional assumption that young voters would support the youngest candidate, a millennial born in 1982 who is gay and married. He is leading among voters between ages 45 and 64 with 26 percent support, according to a Washington Post poll. He got votes from middle-class suburban areas.

Why did they choose the rookie young enough to be their son or nephew instead of political big shots? Biden is running for the third time now, Sanders on his second run. Biden was in the Senate for 36 years and served as the vice president for eight years. Sanders was in the House for 16 years and the Senate for 14 years. Buttigieg’s only political career was as a mayor of South Bend, Indiana. The city has a population of 100,000, somewhere between Boryeong, South Chungcheong, and Miryang, South Gyeongsang.

Some analyzed that his idea of integration with moderates worked, unlike his competitors’. Throughout the campaign, he said that extreme confrontation in the divided United States should not continue. He promised to persuade the 41 percent of Americans without party affiliation and some Republicans as well. He kept a distance from radical promises. He put a brake on competitors’ arguments to resolve income disparity by introducing a tax on the rich and spending taxpayers’ money.

It reflects the Democrats’ wish not to miss the chance to take back the presidency by trying radical changes all at once. They know that pushing them too hard could lead to a backlash. It may as well be a signal from the public to stop the fight as they feel tired of the extreme political confrontations.

Two days later, the U.S. Congress was home to a scene of extreme confrontation. After U.S. President Trump finished the State of the Union speech, House Speaker Nancy Pelosi ripped the speech four times. That’s the reason why Americans put their hopes on a new face rather than on existing politicians. They want to see a complete change to politics in their country.