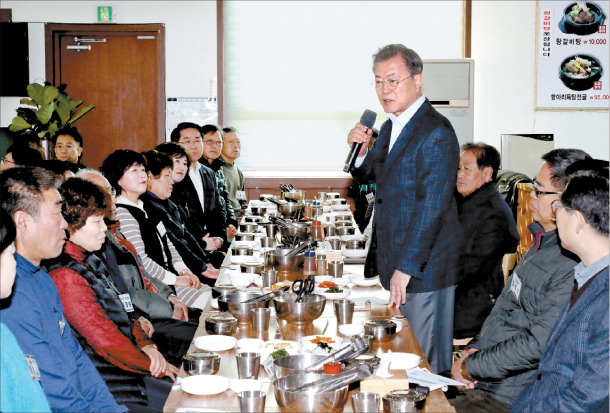 President Moon Jae-in speaks at a luncheon with local residents after visiting a quarantine facility in Jincheon, North Chungcheong. [YONHAP]

Korea’s economy is expected to grow at just 2.1 percent this year, according to survey results released by the state-run Korea Development Institute (KDI) Sunday, casting a pall over hopes for a long-awaited recovery and adding to indications that a deadly new coronavirus will take a significant toll on the country’s economy.

The think tank projected that the economy would grow a mere 0.1 percent basis points higher than last year’s figure, which would continue one of Korea’s worst recent economic slumps.

“Although it is too early to predict the macroeconomic impact of the virus, some negative economic pressure is inevitable,” the KDI said.

In February, however, the KDI expected the virus will inevitably put a halt to the recovery slope, especially in the tourism, hotel and restaurant business.

“When Middle East respiratory syndrome, or MERS, hit Korea in 2015, the number of tourists to Korea between June and August that year shrank by 45.5 percent, which is a loss of 464,000 tourists per month,” the think tank said. “The manufacturing industry will be hit as well due to supply shortage from China.”

The KDI said it is not easy to offer an exact number at this point.

The consumer composite sentiment index (CCSI) jumped from 100.5 to 104.2 in January. Last month, the think tank estimated the CCSI would “show continuous recovery in a gradual manner.” But that stance shifted within a month, and the KDI now says the “pressure to pull back on consumption has increased.”

Exports also appeared to be on a rapid recovery trend until the outbreak of the virus.

In January, the volume of exports dropped by 6.1 percent on-month, but considering the number of working days, the average volume per day jumped 6.1 percent compared to the previous month.

By sector, exports of vessels jumped by 59 percent on-month in January, while semiconductor exports recorded a minus 3.4 percent growth, a recovered figure compared to the minus 17.7 percent growth rate from the previous month.

“The survey was done between Jan. 22 and 29, which means that the market expectation is likely to not have taken the full impact of the coronavirus into consideration,” the report said.

President Moon Jae-in on Sunday encouraged people to carry out “normal consumption activities” after visiting a quarantine facility in Jincheon in North Chungcheong, where more than 170 Koreans from Wuhan are being housed.

“Festivals where a lot of people gather should be restricted, but it is okay to carry out normal economic and consumption activities that are necessary for daily routines,” Moon said.