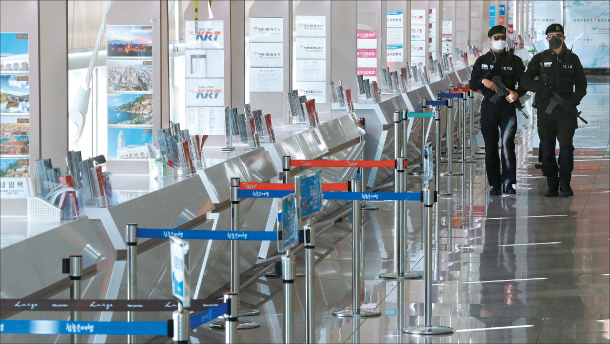 Armed security guards patrol nearly empty check-in counters in Incheon International Airport on Sunday. The number of passengers has dramatically dropped due to the spread of the new coronavirus. [YONHAP]

Prime Minister Chung Sye-kyun on Sunday said the government would dispatch another charter flight to Wuhan, China, in order to evacuate remaining Korean nationals in the area and some of their Chinese relatives.

It would be the third repatriation flight for Koreans in the epicenter of the coronavirus outbreak, following two extractions that returned a total of 701 citizens on Jan. 30 and 31.

Around 200 Koreans are believed to remain in Wuhan, which includes children, pregnant women and people who chose to stay because of family members who are Chinese citizens.

After holding a meeting of the Central Headquarters of Safety and Countermeasures Against Disasters, Chung said the government would do its best to protect every last one of its citizens in Wuhan with an additional evacuation, though he did not elaborate on when this would be possible.

With regards to enforcing an entry ban on people coming from other parts of China other than Hubei Province, where Wuhan is located, Chung said Seoul was considering imposing additional travel restrictions based on how the situation develops.

On Sunday, Korea confirmed its 25th new coronavirus, involving a 73-year-old woman living in Siheung, Gyeonggi. She had not visited China, but may have instead contracted the infection from relatives.

Her diagnosis makes her the oldest coronavirus patient in Korea.

According to the Korea Centers for Disease Control and Prevention (KCDC), the woman’s son and daughter-in-law made recent visits to China, spending almost two months from November last year to Jan. 31 in Guangdong Province, the province with the largest number of confirmed cases outside of Hubei. The couple both tested positive for the coronavirus on Sunday afternoon, the KCDC said, making them the 26th and 27th confirmed cases in Korea.

The daughter-in-law exhibited symptoms of breathing difficulties last Tuesday, which makes it likely she transferred the virus to Patient No. 25, health authorities said.

At first, analysts and medical experts suspected that this newest patient may be the first to contract the disease from people who have not yet shown symptoms, but the KCDC said on Sunday afternoon that the daughter-in-law showed symptoms earlier than Patient No. 25 and that it was yet unproven whether the virus could be transmitted when its carrier has not yet manifested symptoms.

For now, patient No. 25 remains in a stable condition, though her advanced age has put medical authorities on alert.

China’s National Health Commission last week revealed the elderly were especially vulnerable to the Wuhan coronavirus, with 80 percent of fatalities in the country being people over the age of 60.

By Sunday, the coronavirus had infected 37,554 people around the world and caused at least 813 deaths, the vast majority in mainland China.

In Korea, the growing number of coronavirus diagnoses involving people who have visited China has increased pressure on the government to expand its entry ban prohibiting travelers from Hubei to cover all travel from China.

“Currently we are in the situation where we have to monitor the spread within different Chinese regions,” said KCDC chief Jeong Eun-kyeong Sunday.

“The most important thing is cooperation from those who have visited China. We advise them to stay home and refrain from external activities involving contact with many people for two weeks, and visit selected medical facilities to receive tests if symptoms arise.”

With the coronavirus disease looking increasingly like a global pandemic, analysts note that the likelihood of the disease spreading from countries other than China is on the rise. On Friday, the Korean Embassy in Japan revealed that a total of 14 Korean nationals were aboard the Diamond Princess - a Japanese cruise liner quarantined at Yokohama, Japan, due to a coronavirus outbreak on board, correcting an earlier briefing that said nine Koreans were on the ship.

The outbreak on the ship, which has had more coronavirus confirmations than in any location outside of China, rang alarm bells around the world about the risks of contamination through maritime routes.

With Busan being a popular stopping point for international cruise voyages in Northeast Asia, the Korean government has resolved to take extra precautions with all arriving ships. Any ship that stops in Korea for any period must report whether it carries passengers who have visited China or display symptoms linked to the coronavirus. Suspected patients will then be quarantined on the vessel and prevented from setting foot on Korean soil.

Any passengers getting off ships at the country’s harbors will be subject to a final health inspection at customs, according to the KCDC.

Analysts note that the rapid decline in travel by Koreans to Japan as a result of tensions between may have helped Korea’s quarantine efforts. In past voyages, the Diamond Princess made stops in Busan, but there was no such layover this time, given reduced demand for trips between Korea and Japan.