[Korean Box Office] ‘The Closet’ opens at No. 1 in slow theater week: Coronavirus continues to affect ticket sales at cinemas all over Korea

[Korean Box Office] ‘The Closet’ opens at No. 1 in slow theater week: Coronavirus continues to affect ticket sales at cinemas all over Korea 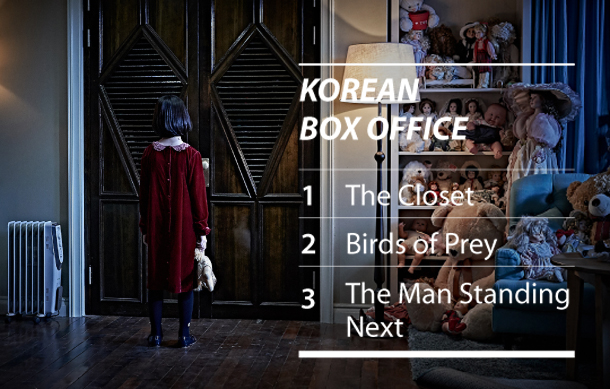 “The Closet” took first place at the local box office in its first weekend in theaters. However, overall sales were down as people shied away from the local theaters due to the ongoing virus outbreak. [CJ ENTERTAINMENT]

Occult horror film “The Closet” debuted at the top of another sluggish box-office weekend due to the coronavirus outbreak.

“The Closet” attracted 489,000 moviegoers to 1,192 screens in its first weekend. The film tells the story of Sang-won (played by Ha Jung-woo), the awkward father of Ina, who moves into a new home hoping for a fresh start. Due to his busy work, however, Sang-won neglects to take care of Ina, and one day, she disappears without a trace in their own house. A police investigation fails to come up with any leads for a month. But then Sang-won is introduced to Kyung-hoon, who introduces himself as an exorcist and claims that Ina has been taken by an evil spirit living in the closet. Willing to try anything to get his daughter back, Sang-won allows Kyung-hoon to enter his home to draw out the spirit, who, according to Kyung-hoon, has been kidnapping children for a decade.

DC Comics’ “Birds of Prey (and the Fantabulous Emancipation of One Harley Quinn)” made a relatively disappointing debut at the local box office, opening in second place, selling 166,000 tickets at 946 screenings. Harley Quinn became an audience favorite after Margot Robbie’s portrayal of the character in “Suicide Squad” (2016).

The film starts off with Harley telling the audience that she and Joker have just broken up, for real this time. Wanting to make their breakup public, Harley blows up the Ace Chemicals factory, where she was reborn as Harley Quinn, vowing to live for Joker. What Harley didn’t anticipate, however, was that she’s made a lot of enemies in Gotham City while spending time with Joker, and all of them are plotting revenge against her.

One of the worst is Roman Sinois, a gangster boss known by his villain name Black Mask, and Harley manages to escape his clutches by promising him to get him a diamond that will lead him to a limitless fortune. Embarking on her adventure, however, Harley’s fate becomes intertwined with other vigilantes in the city.

“The Man Standing Next” took the third spot, selling 159,000 tickets for 834 screenings. Although the local film generated positive reviews for the superb acting performances by Lee Byung-hun, Lee Sung-min and Lee Hee-jun, the release of the film was untimely, clashing with the news of the virus outbreak.

Last but not least, local animated film “Miniforce: Deeno the King of Dinosaurs” took fifth place, with 34,000 people seeing the film at 483 screens. The film features a team of robot rangers teaming up with Deeno, the dinosaur king to protect the Earth from the space villain named “Queen.”