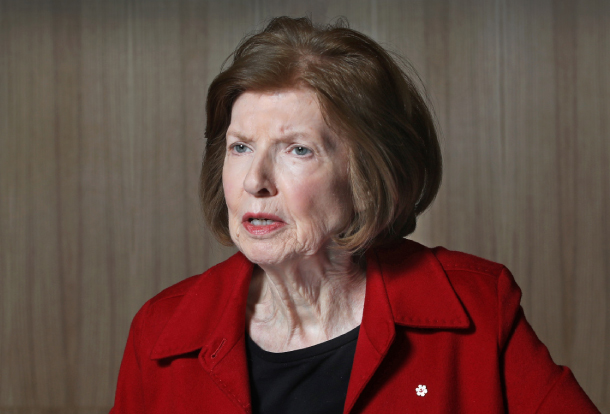 Fears about the new coronavirus outbreak? Her group, the IACC Council, was monitoring the situation closely, she said, and hoping it ends soon.

“We are certainly concerned, especially for the people who have been infected,” said Labelle. “We’ve had others like this before. And they don’t last forever, thankfully, so that’s where we are right now.”

In an interview with the Korea JoongAng Daily last Thursday in Myeong-dong, central Seoul, Labelle talked about her visit to Seoul to check on preparations for the conference, the coronavirus outbreak and what the forthcoming IACC will be about.

The 19th IACC, co-hosted by Korea’s Anti-Corruption and Civil Rights Commission (ACRC) and Transparency International, is set to be held from June 2 to 5 at Coex in Gangnam District, southern Seoul, attracting nearly 2,000 people from governments, civil society groups, academia and media to talk about worldwide anticorruption efforts.

The following are excerpts of the interview with Labelle, which were edited for clarity.

Q. Is this your first time in Korea?

A. No, I came in 2003 when we had the [11th] IACC here in Korea. This is the only country where we’re having the IACC a second time, the only country anywhere in the world, which is a good sign. It means Korea has a lot to offer.

During your weeklong visit in Seoul, I heard you met President Moon Jae-in and ACRC Chairperson Pak Un Jong. How were the meetings? What did you talk about?

Let me start with the meeting with the president. It was very useful because it was obvious the president believes that one has to deal with corruption in the world, and he was also committed to the IACC, so we were able to discuss issues such as money laundering and how new technology was able to move money so quickly. We were of course able to also talk about the CPI [Corruption Perceptions Index], and how governments, civil societies and business sectors have to work together in order to ensure that we find common solutions and identify early problems.

The meeting with the chair of the ACRC was also very important, and we dealt with some of those questions, but also, you know, it left me with a very positive feeling about the enthusiasm of the team at the ACRC for the IACC. I was able to see the amount of time and energy that has already been put into planning this conference, and we were able to cover many fronts during our discussion.

Korea has several coronavirus patients, and many people here, even government offices, are canceling or postponing events as a result. Has the IACC Council received any inquiries about the coronavirus so far, and how is it planning to deal with the outbreak?

We have not had any requests in that regard. We are certainly concerned, especially for the people who have been infected. We are monitoring the situation closely, and what we’re hoping is that all countries that are taking very special measures will be able to contain this before it gets worse. As with many such unfortunate events that have taken place in the world, you get a peak at one time, and then there’s so much energy put into trying to deal with it. We’ve had others like this before. They don’t last forever, thankfully, so that’s where we are right now.

I heard this year’s theme is “Designing 2030: Truth, Trust and Transparency.” How do you expect the conference to be different from past ones?

Every conference has been different in its own way, but this one is somewhat special in that we’ve got sustainable [development] goals and 2030 coming soon. This is one aspect, which is a guide.

The other one is really what is happening around the world right now in terms of how information technology is moving in ways that can be positive and helping to detect problems in being able to move illicit money and [allow] money laundering from one country to another around the world.

I think we want to bring people who have done some very important things and who have brought good solutions to problems, and to be able for them to share that. We’re looking at building a future based on positive solutions that can make a difference in the long term.

How would you sum up your Seoul trip?

When I leave tomorrow, I’ll feel very good about what the IACC will be about, about the work that’s been done, about the enthusiasm in this country, about hosting this conference and the commitment and resources that are being put to use. So I feel very good.