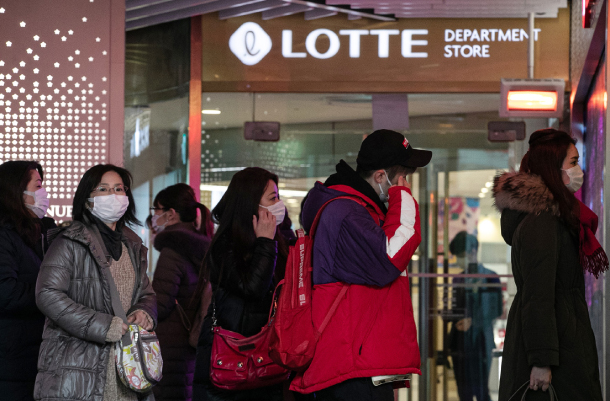 People queue to enter Lotte Duty Free in Myeong-dong, central Seoul, Monday after the shopping center closed Friday following news that a Chinese tourist who came down with the coronavirus shopped nearby on Feb. 2. [NEWS1]

Doctors from the Korean Society for Preventive Medicine and the Korean Society of Epidemiology said Monday in a joint statement that the government’s disclosure of places visited by people later diagnosed with the new coronavirus had “zero effect” on public health, saying it only aroused unnecessary anxiety.

The two groups said members of the public shouldn’t worry about contracting the disease by visiting the establishments or passing by areas where infected patients went - as long as those areas have been disinfected.

“The biggest obstacles for overcoming the new coronavirus crisis are fake news and disinformation, excessive anxiety, groundless ‘solutions’ constantly raised by non-experts, stigma against patients and people who contacted them and a lack of voluntary help from people with symptoms of the virus or those who are subject to epidemiological investigations,” read the joint statement.

“In terms of public health, there’s zero effect in shutting down schools and stores near places infected patients visited,” the statement continued. “Such acts only cause unnecessary social costs.”

Kim Dong-hyun, a medicine professor at Hallym University in Chuncheon, Gangwon, and head of the Korean Society of Epidemiology, stressed there was no need to close areas for a long period.

“When government authorities get hold of the travel routes of infected patients,” Kim said, “they take measures to prevent the spread of the virus in those areas, so even if the virus had existed there, it would be 100 percent killed” after preventive measures are taken.

“People can block entrances to those places for about a day after spraying disinfectants, but there’s no need to shut the places down for a couple of days,” Kim continued.

He went on, “I understand how afraid parents must feel, but it’s an overreaction to close schools that are one kilometer [0.62 miles] away.”

The warning came as Korean government officials have been disclosing detailed information about the infected patients’ travel routes in Korea, revealing the names and locations of shopping centers, supermarkets, convenience stores, restaurants, clinics and drug stores, often leading those establishments to close for a couple of days. On social media, Koreans have shared those travel routes with loved ones, urging them not to go nearby.

Korea has 27 coronavirus patients, with the last confirmed Sunday. No additional cases were reported Monday. All but four patients are being taken care of at government-designated hospitals for isolated treatment and are mostly in stable condition.

Health officials said Monday that Patient No. 11 has been discharged after a full recovery. Patients No. 1, 2 and 4 were previously discharged.

Seoul announced Monday it would temporarily suspend entry of cruise ships and will turn away two cruise ships expected to dock in Busan today and Wednesday.

Seoul also said it would launch from Wednesday a mobile phone app to monitor the health of visitors from China on a daily basis. If visitors from China do not report their condition for over 24 hours, they will be contacted by phone on the third day. If they cannot be reached, the Ministry of the Interior and Safety and the police will track them down.