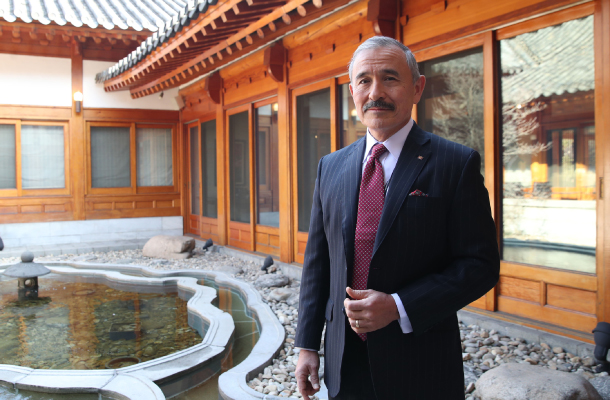 U.S. Ambassador Harry Harris gives a tour of his residence in Seoul, Habib House, to the JoongAng Ilbo on Tuesday to celebrate the centennial of the birth of former U.S. Ambassador Philip Habib, for which it is named. [WOO SANG-JO]

U.S. Ambassador to Korea Harry Harris said he was unaware of renewed talk in the Korean government about the possibility of scrapping a bilateral military intelligence-sharing pact with Japan known as Gsomia, but he stressed that the American position remains that the agreement is “important.”

Sitting down with JoongAng Ilbo reporters and a video crew after a tour of his residence, Habib House, Ambassador Harris said, “[Gsomia] is a bilateral agreement between Korea and Japan, and the challenges they have - they have to work out.”

In an exclusive report on Monday, the JoongAng Ilbo reported that a hard-line stance in favor of terminating Gsomia was gaining momentum in the Blue House, citing a government source familiar with Korea-Japan ties.

Terminating Gsomia, short for General Security of Military Information Agreement, continues to be Seoul’s most powerful trump card in negotiations with Tokyo as the two neighboring countries remain stuck in a diplomatic and trade spat over Japan’s use of Korean forced labor during World War II.

Harris’s remarks came as part of an interview celebrating the centennial of the birth of former U.S. Ambassador Philip Habib, after whom the residence is named.

Focusing on Habib House and its meaning in history and to bilateral relations, Harris said the residence was a “symbol and benchmark” of the alliance.

Habib House comes with a thick, checkered history, as it was occupied by North Korean troops during the Korean War.

Among the artifacts that Harris showed, one photograph stood out: a photograph of an American soldier restoring the stars and stripes to Habib House.

Asked about the challenges that the alliance faces, such as Gsomia and the military cost-sharing agreement, or the Special Measures Agreement (SMA), Harris said the alliance is strong.

“There are always issues in any alliance, and we had truly visionary leaders like Ambassador Habib and [former Korean] President Kim Dae-jung,” he said.

He also congratulated Korea for recent landslide wins at the Academy Awards by the film “Parasite.”

He commented on a certain noodle dish that he had for lunch on the day of the award ceremony, chapaguri, which is featured in the black comedy that won four Oscars Sunday in Los Angeles.

Negotiations on the SMA are continuing.

Gsomia may still face a bumpy road ahead.

The Blue House on Wednesday said the fate of the intelligence-sharing pact was not being “specially considered once again” amid currently ongoing economic negotiations with Japan. The negotiations over the trade restrictions and Gsomia are meant to “produce a mutually beneficial result” for both countries, said a high-ranking presidential official.

Likewise on Wednesday, the Ministry of Foreign Affairs again urged Tokyo to withdraw its restrictions on exports to Korea in line with the spirit of an agreement reached on Nov. 22, the day before the Blue House announced Gsomia was to continue for the time being.

“Our decision to [conditionally retain the pact] … was based on the premise that we can end the effectiveness of Gsomia at any time,” a ministry official said.

With the Korean economy reeling under the impact of the Wuhan coronavirus outbreak, political analysts say a decision to end Gsomia could shore up domestic support for the government and ruling party ahead of the April general elections by exploiting anti-Japanese public sentiment.