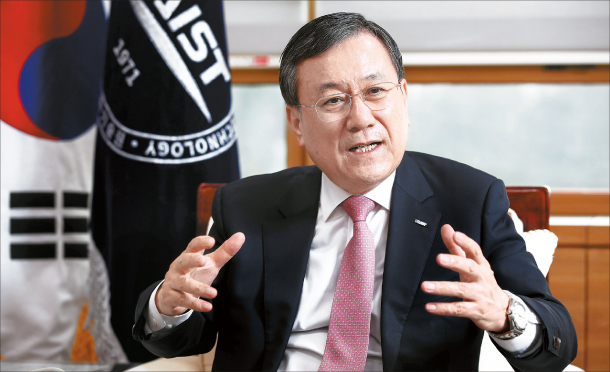 Shin Sung-Chul, president of KAIST, talks about the roles of universities in the coming fourth industrial revolution during a recent interview with the JoongAng Ilbo at his office in the university’s Seoul campus in eastern Seoul on Monday. [WOO SANG-JO]

Shin Sung-Chul, the president of KAIST, says it is time for universities to change in order to adequately prepare for the fourth industrial revolution.

KAIST recently introduced a new system called Singularity Professor, which aims to exempt professors from receiving evaluations for about 10 to 20 years in order to allow them to solely focus on conducting more in-depth research. In Korea, university professors are evaluated on their performances and capabilities every year.

According to Shin, the current system that imposes burdens on professors regarding their evaluations should be changed in order to forge “first-mover” professors who can develop innovative scientific skills to play a critical role in the coming era of the fourth industrial revolution.

The JoongAng Ilbo sat down with Shin at his office at the university’s Seoul campus in eastern Seoul Monday to talk about his vision.

Q. What was your intention behind the Singularity Professor system that exempts professors from being evaluated?

A. If we evaluate professors and push them to write more papers, they are not going to conduct research on issues such as presenting solutions for humanity’s biggest problems or changing the paradigm of knowledge, which are the most important topics but not interesting enough to catch the public’s attention. It doesn’t mean that we are not going to have any professor evaluations. We will conduct an evaluation on their studies after 10 years. The period will only be extended to 20 years for a few professors whose potential has been proven. An examination to check their work progress is also planned for after about five years. The university will fully support them financially.

How many positions do you plan to make available?

We plan to hire about 10 professors in total. Since there are about 650 professors at KAIST, the number is roughly two percent. I don’t expect all 10 professors to be successful. If only one of them succeeds in his or her research, our new system will meet its original objective. All professors who get poor evaluations after 10 years will lose their advantage and will be evaluated on their results every year just like other professors.

What requirements are needed to apply for KAIST’s so-called Singularity Professor?

We are looking for young professors who are under the age of 45. It aims to allow them to focus on their studies until they turn 65 - the retirement age. However, if anyone has great enthusiasm for their vision, their age shouldn’t matter. In the current system where all professors need to be evaluated on their results and capabilities every year, our new system will likely have a ripple effect. I’m sure other universities will follow suit soon.

The system is innovative, but, at the same time, very risky. What made you decide to give it a go?

Korea saw miraculous success in only half of a century. The reason why the country could achieve such rapid growth was because it used a strategy called “fast flow” [a strategy that aims to build a country by copying already proven models and executing them quickly to “follow” the moves of the predecessor.]

It is true that papers written by Korean professors showed great improvements quantitatively over the past decades. However, they are still inadequate when competing with those of other developed countries qualitatively. We have used over 5 trillion won [$4.74 billion] annually to buy technology skills from other countries. Although Korea’s largest electronic industries are being considered as leaders in the global market, the core technology skills are coming from other countries.

They have reached their breaking point now. I came up with the idea in an attempt to prepare for the upcoming fourth industrial revolution.

Isn’t it a very important duty for a university to provide education to students and conduct fundamental studies?

The roles of universities are changing. Until the end of the 19th century, a major role of universities was providing educational space for students. In the beginning of the 20th century, when people started to attend graduate schools, professors’ studies and research became important tasks. Universities must make efforts to not only provide spaces for knowledge creation but also create added value through knowledge.

In that sense, Korean universities are far behind. Korea’s economy is now dependent on a few major companies. Many small- and medium-sized businesses, which account for about 98 percent of the total number of companies in Korea, are responsible for only 18 percent of the country’s exports.

This means that Korea’s economy is completely reliant on the performances of a few major companies. Universities and research institutes need to be more focused on developing technology skills and commercializing them. KAIST wants to lead the change.

In order to allow professors to only focus on their studies instead of conducting government-funded research-and-development (R&D), universities must fully support them financially. Can KAIST afford it?

Many top universities in the United States, including Stanford University in California, earn one-third of their financial resources from the government while another one-third comes from students’ tuition fees. The remainder comes from funding, which is mostly provided by the school’s successful alumni members. This kind of funding practice works as a motivation for enrolled students as they discover their own passions by seeing and admiring the work of their seniors.

Last month, KAIST alumni Chang Byung-gyu, head of the Presidential Committee on the fourth industrial revolution, donated 10 billion won to the university. Also, an anonymous donator said they wanted to contribute 11 billion won worth of land to KAIST. I have a feeling that KAIST will be continuously given donations from its successful alumni members or society.