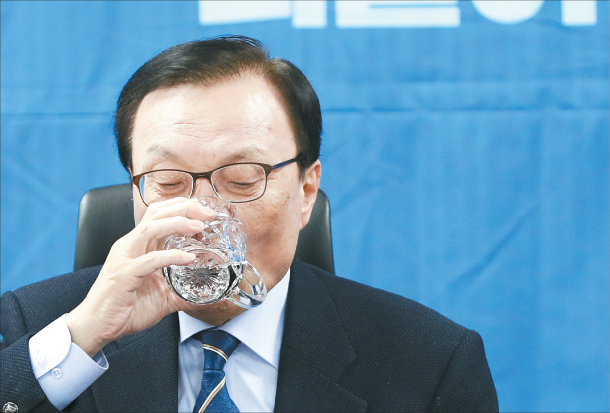 Lee Hae-chan, chairman of the ruling Democratic Party, drinks a glass of water at a party leaders’ meeting in the National Assembly in Yeouido, western Seoul, on Friday. [YONHAP]

The Democratic Party (DP) withdrew a criminal complaint about a history professor who criticized the ruling party in a newspaper column, following a fierce public backlash.

The public affairs bureau of the DP sent a text message to reporters Friday morning saying the party had withdrawn the complaint against Professor Lim Mi-ri and the Kyunghyang Shinmun. No apology, however, was offered by Chairman Lee Hae-chan.

Lim, a professor at Korea University’s Center for Korean History, contributed a column to the Kyunghyang Shinmun on Jan. 29, urging the public to vote for parties other than the DP to hold it accountable for the current political tumult.

Citing an internal power struggle in the criminal justice system and political strife between the ruling and opposition parties, Lim wrote that public loathing of politics is deepening. 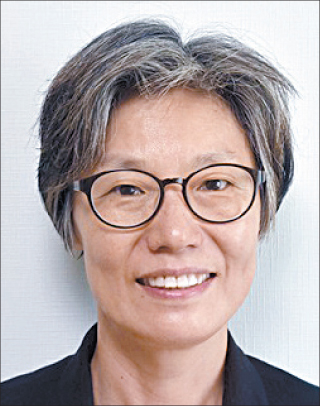 “The Liberty Korea Party [LKP] is somewhat responsible, but the DP is more responsible,” she wrote, “because it is serving the administration’s interests rather than the people’s desires, although it proudly defines itself as an administration backed by candlelight protesters.”

At the end of her column, Lim urged voters to “tame the political parties” in the upcoming April general elections. “Let’s create political parties that are trying to satisfy the people,” she wrote. “I, therefore, propose, ‘Let’s vote for parties except for the DP.’”

On Feb. 5, the DP asked the prosecution to investigate Lim and two Kyunghyang Shinmun officials, saying the column violated election laws. While the DP did not publicize that action, Lim said on Facebook Thursday that she was the subject of a criminal complaint.

“I recently got a phone call from the Seoul Southern District Prosecutors’ Office that a complaint was submitted against me,” Lim said in an exclusive interview with the JoongAng Ilbo on Thursday. “I was accused of conducting illegal campaign activity before the official campaign period and violating a ban on encouraging the voters to cast ballots [for a specific political party]. The complainant was DP Chairman Lee.”

Lim, a modern history professor who specializes in student activism, did not hide her disappointment at the DP. “I am baffled,” she said. “The DP won power through a democratization movement. The key to democratization movements is freedom of speech. They used to fight for such freedoms, but they demanded a probe against me because I criticized them. It is shameful that the DP is using the word democratic in its name.”

She said she supports no particular political party. “Of course, I don’t think the DP is doing worse than the LKP,” she said in the interview. “But the DP is carrying far larger responsibility. Isn’t it a party that was created through the sacrifices and efforts of countless people?”

The Justice Party issued a statement on Thursday saying the DP must drop its complaint. “We cannot tolerate the DP’s action to counter a column critical of the party with a complaint to the prosecution,” said Kang Min-jin, spokeswoman for the Justice Party.

“A newspaper column is intended to present sharp opinions about a party and the government.”

Kang said the DP’s complaint had violated the freedom of speech and independence of the press.

Influential liberal figures, such as prominent critic Chin Jung-kwon, Gwon Gyeong-ae of the Lawyers for a Democratic Society and Kim Kyung-yul, a former head of the Center for Economic and Financial Justice at the People’s Solidarity for Participatory Democracy (PSPD), joined the condemnation of the DP.

The PSPD, a strong supporter of the Moon administration and the DP, also issued a critical statement. “It is extremely inappropriate for the DP chairman to overreact by filing a criminal complaint against the author and the newspaper,” it said.

Opposition politicians did not miss the opportunity to attack the DP. “It is a dictatorial action to gag the press and violate freedom of speech,” said Rep. Shim Jae-cheol, floor leader of the LKP.

After a barrage of bad press, the DP said Friday it decided to recant the complaint. It tied Lim to Ahn Cheol-soo, who is prompting an anti-Moon political alliance ahead of the April general elections.

“Professor Lim was a former member of Ahn Cheol-soo’s think tank. We decided to submit the complaint because we believed that her column had a clear political purpose, going beyond a simple expression of her opinion,” the DP’s public affairs bureau said. “But we admit that we went too far, and we express regret.”

Twelve minutes later, the DP sent a correction to reporters by replacing Ahn’s name with “a politician.”