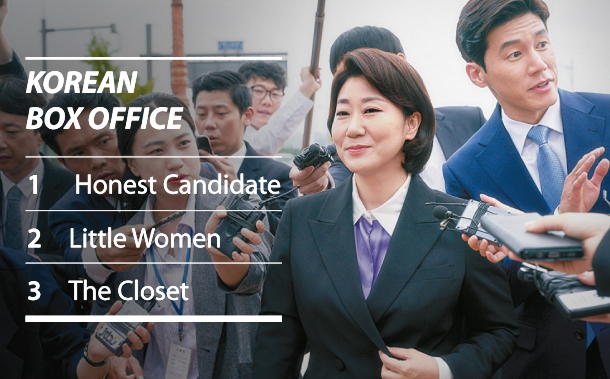 “Honest Candidate,” a comedy starring actor Ra Mi-ran, topped the box office during another weekend of sluggish ticket sales at local cinemas. Despite low ticket sales due to the coronavirus outbreak, theater chains celebrated the big win for “Parasite” at this year’s Academy Awards by re-releasing the film over the weekend. [NEXT ENTERTAINMENT WORLD]

After a few slow weeks at local cinemas, the news of “Parasite” taking home four Oscars, including Best Picture, was a bright spot last week for the Korean film industry, which has struggled to attract moviegoers amid coronavirus concerns.

Local comedy “Honest Candidate” debuted atop the box office over the weekend, attracting 677,000 people to 1,179 screenings across the country. The film marks popular actor Ra Mi-ran’s first lead role since starring in “Miss & Mrs. Cops” last May. Ra portrays the ambitious and crafty politician Joo Sang-sook who is one day struck with a spell that forces her to only speak the truth. Her troubles begin when she cannot keep the promises she makes while running for a seat in the National Assembly.

The highly-anticipated “Little Women” also arrived in local theaters last week, selling 313,000 tickets to 1,099 screenings over the weekend. Adapted from the much-beloved classic novel by Louisa May Alcott, the film won Best Costume Design at the Oscars earlier in the month. Excitement for the film grew among fans of the classic when the stars playing the March sisters were first announced. Saoirse Ronan plays Jo, Emma Watson plays Meg, Florence Pugh plays Amy and Eliza Scanlen plays the role of Beth. Actor Timothee Chalamet portrays Theodore “Laurie” Laurence and veteran actor Meryl Streep appears in the film as Aunt March.

A black-and-white version of the film is scheduled to hit theaters on Feb. 26, hoping to attract fans of the film eager to see a more artistic version of the movie. Reportedly, director Bong Joon-ho and cinematographer Hong Kyung-pyo readjusted the tone and film contrast for every scene of the new version.

Adventure action-comedy “Sonic the Hedgehog” placed fifth at the box office, selling 68,000 tickets for 605 screenings. Based on the Japanese video game franchise, the film centers around the quirky Sonic (voiced by Ben Schwartz) who secretly resides on Earth, hiding his supernatural ability to run at supersonic speeds. The mad scientist Dr. Ivo Robotnik, who is after Sonic’s powers, is played by Jim Carrey, while actor James Marsden portrays a local sheriff that helps Sonic fight off Robotnik.