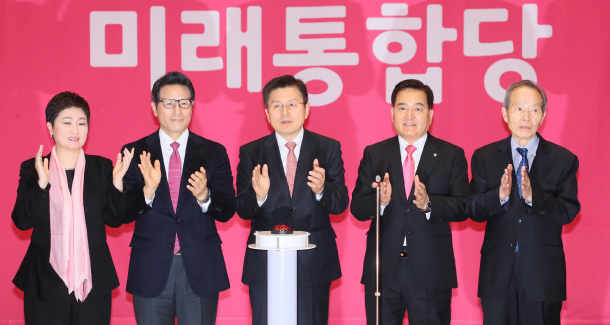 Conservative politicians completed their merger on Monday and launched a new political party, creating a united front against the Democratic Party (DP) and the Moon Jae-in administration ahead of the April general elections.

The United Future Party (UFP) held its launch ceremony at the National Assembly in the afternoon with about 1,000 participants. The Liberty Korea Party (LKP), New Conservative Party (NCP) and the Advance On Party (AOP) merged to form the UFP 58 days ahead of the general elections, and LKP Chairman Hwang Kyo-ahn was announced as its new head.

The LKP’s 105 lawmakers, seven lawmakers of the NCP and Rep. Lee Un-ju of the AOP joined the new political party. With 113 lawmakers, the UFP became the largest opposition party. The ruling DP currently has 129 lawmakers. The UFP also has a legislative ally, the Future Korea Party. The UFP’s sister party with five lawmakers was created by the LKP as part of a strategy to win more votes for proportional representations.

The merger ended the split of conservative and centrist politicians in the aftermath of President Park Geun-hye’s impeachment in December 2016. The Saenuri Party, then the ruling party of Park, changed its name to the LKP, while dozens of anti-Park politicians bolted to create the Bareun Party in January 2017.

Chairman Hwang of the LKP, Chairman Yu Eui-dong of the NCP and Chairwoman Lee of the AOP attended the launch ceremony. Conspicuously missing, however, was Rep. Yoo Seong-min, the de facto leader of the NCP.

The Supreme Council, the highest decision-making body, of the UFP has 13 members. Nine of them are current LKP Supreme Council members including Hwang. Four others are Jeju Governor Won Hee-ryong; Lee Jun-seok of the NCP; former lawmaker Kim Young-hwan of the People’s Party and Kim Won-seong of the AOP.

Key members of the LKP, such as floor leader Shim Jae-cheol, will keep their posts in the new party.

The UFP said it has chosen pink as its color and revealed its new logo at the launch ceremony.

“We have accomplished a historic task today,” Hwang said in his speech as the new UFP chairman. “We took a giant step that will be remembered in history and liberal democracy.”

Hwang said he is overwhelmed by the conservative merger. “We once worried people in the liberal democratic forces,” he said. “But I am extremely happy to show them our refreshing start today. The launch of the UFP was possible because of the people’s strong desires to judge the Moon administration and to protect liberal democracy.”

“The first vision of the UFP is innovation, the second is expansion and the third is future,” said Park Hyung-jun, a sociology professor from Dong-A University who chaired the preparation committee of the new party.

“The party’s most important value is the constitutional sprit, in order to stop the Moon administration from shaking the constitutional order and destroying the miraculous accomplishments of the country over the past seven decades.”

The new party announced its first campaign pledge centered on national defense. Rep. Kim Jae-won, head of the UFP’s pledge development team, said the party will extend the retirement age of career soldiers to 60 and offer a three-day monthly leave to the enlisted soldiers.

The launch of the UFP means the end of the 23-year history of the main conservative party in the country. Although it changed its name from the Grand National Party to the Saenuri Party to the LKP, it has remained as the same legal entity since November 1997.

The UFP will start a nomination process and form a campaign committee in the coming weeks. Two senior lawmakers who are considered Park loyalists - Rep. Jeong Kab-yoon and Rep. Yoo Ki-june - said Monday that they won’t seek re-election, although their districts are located in conservative strongholds. Jeong is a five-term lawmaker of Ulsan and Yoo a four-term lawmaker of Busan.

The UFP’s nomination committee said it will hold interviews of candidates in the Busan, Ulsan, Daegu and the Gyeongsang provinces this week, vowing to field fresh faces to attract voters.

The liberal political parties all criticized the conservative merger. “The new, largest opposition party is launched today,” said Rep. Lee In-young, floor leader of the DP. “I want to congratulate them, but I can’t. I don’t see any new faces or new visions. They returned to the Saenuri Party.”

Rep. Park Kwang-on called the UFP a “copycat of the Saenuri Party.” “It is nothing more than a merger of those who opposed impeachment and Park loyalists,” he said. “When the voters see the UFP, they will be reminded of the impeachment scandal.”

The Justice Party, Bareunmirae Party and the Alternative party all issued criticisms. “The reformists who left their home returned after they were caned,” said Chairwoman Sim Sang-jeung of the Justice Party. “This means a complete failure of the conservative reform pushed forward after Park’s impeachment.”