No. 29 causes concerns of untraceable infection

No. 29 causes concerns of untraceable infection 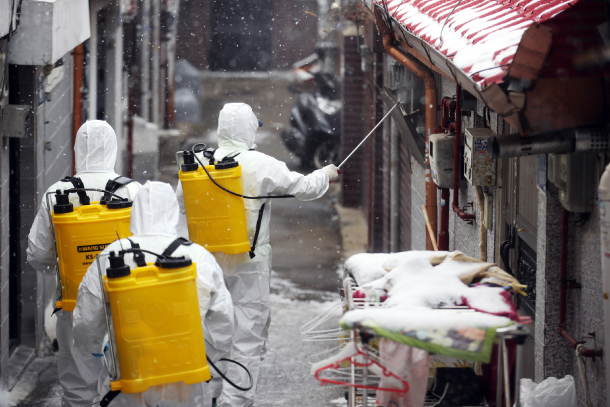 The 30th case of the new coronavirus in Korea was confirmed Monday as the wife of Patient No. 29, an 82-year-old Korean man who had been volunteering with low-income senior citizens and spent days visiting several medical clinics and pharmacies before his diagnosis.

Patient No. 30, a 68-year-old Korean woman, tested positive for the virus the previous day, according to the Korea Centers for Disease Control and Prevention (KCDC). Her husband, Patient No. 29, who had not traveled overseas in recent months nor come into contact with any known coronavirus patients, was confirmed as having tested positive for the new coronavirus earlier Sunday.

How the elderly couple, who are residents of Jongno District, central Seoul, contracted the virus is still unclear. Authorities are scrambling to trace all the people they came in contact with in the past two weeks amid heightened concerns of secondary and tertiary infections.

Patient No. 29 had a pre-existing heart condition and visited two different local clinics and two pharmacies prior to going to Korea University Anam Hospital’s emergency room in Seongbuk District, central Seoul, Saturday morning, with complaints of chest pains. The doctor there discovered through a CT scan that the man had symptoms of pneumonia and tested him for the coronavirus. The couple is being treated at Seoul National University Hospital in central Seoul, one of the state-designated facilities for the virus, officially called Covid-19, since Sunday, and they are both in a stable condition with mild fevers.

The KCDC determined Monday that Patient No. 29 had come into contact with at least 114 people who have been self-quarantined and are being monitored by health authorities.

No. 29 was said to have developed a cough on Feb. 5, according to the health authorities. He visited two private local clinics in Jongno District that day - Shin Jung-ho Medical Clinic and Kangbuk Seoul Surgery - and stopped by a pharmacy.

Over the next 10 days, he made a total of eight visits to both clinics and also made multiple stops at two pharmacies in Jongno. On Saturday morning, he again visited Kangbuk Seoul Surgery before heading to Korea University Anam Hospital around 11:45 a.m., where he spent hours in the emergency room, putting him in contact with other patients and medical staff before he was put into isolation around 4 p.m. that day.

No. 29 came into contact with 76 people while in the Korea University hospital emergency room - 45 medics and hospital staff and 31 patients. They are likewise undergoing self-quarantine or are isolated in single rooms in the hospital.

Patient No. 29 was also revealed to have regularly volunteered to deliver lunch boxes to senior citizens who live alone in his neighborhood, raising concerns that he could have come into contact with some of the most vulnerable members of society. However, the KCDC confirmed Monday that Patient No. 29 had not made food deliveries since Feb. 1.

But health officials did reveal that Patient No. 29 had visited a senior welfare center in the past two weeks and that his activities, other than visits to medical clinics, are being traced to check where he could have contracted the virus.

Patient No. 30 is thought to have contracted the virus between Feb. 6 and 8, when she developed cold-like symptoms, according to health officials. She has a record of visiting Seoul National University Hospital’s gastroenterology department on Feb. 8 and she also accompanied her husband on visits to Kangbuk Seoul Surgery and the Korea University hospital.

She had been in self-quarantine since early Sunday immediately after her husband’s diagnosis, before she was also confirmed to have tested positive for the virus. However, despite being in self-quarantine, she came in contact with a reporter, raising questions on the efficacy of this system.

Patients No. 29 and 30 appear to have contracted the virus outside the government monitoring system which has tracked those who traveled overseas and those who came into contact with confirmed patients. Thus, the government has been bolstering efforts to prevent further transmission of the virus, including measures to build a monitoring system for regional clinics for the early detection of patients and protection of elderly care facilities against contamination.

Vice Health Minister Kim Gang-lip said in a press briefing Monday, “Korea has been effectively preventing the spread of Covid-19 in society, however based on the latest situation, we need to become more vigilant.”

As of Monday, Korea tested 8,171 people for the virus since the beginning of January, with 7,733 testing negative and 408 awaiting results. So far, 10 of the 30 confirmed patients have fully recovered, and Patient No. 28, a 31-year-old Chinese woman who tested negative twice, was set for release from quarantine Monday.