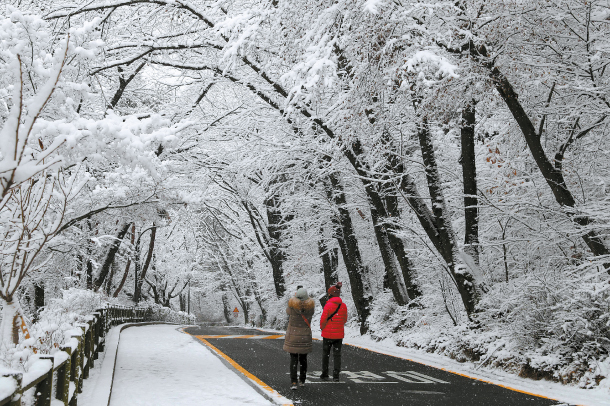 Two people take a walk under a canopy of snowflake-covered trees along the beltway of Mount Namsan in Seoul on Monday.

Seoul received the largest single-day snowfall of the season on Monday as up to 4.1 centimeters (1.61 inches) of snow fell in the capital, the Korea Meteorological Administration (KMA) said.

Along with the snowfall, the morning temperature plunged to minus 5.5 degrees Celsius (22.1 degrees Fahrenheit) in Seoul, the KMA said, adding that the windchill made it feel around minus 10.5 degrees Celsius.

The agency said Seoul’s daily low temperature will further fall to minus 8 degrees Celsius on Tuesday.

The first snow of the season was witnessed in Seoul on Nov. 15 last year, but the amount was too small for snow to accumulate.

Further small amounts of snow fell in the capital on Dec. 7 last year and Jan. 1 this year.

Snow accumulation was measured on Jan. 19 and Feb. 4, but the amounts were a mere 0.3 centimeters and 0.4 centimeters, respectively.

The reduced snowfall in Seoul and most other parts of the nation occurred alongside frequent spells of unseasonably warm weather this winter. Indeed, southern coastal regions last month recorded their highest January daily lows of 10.3 degrees Celsius, with Jeju Island’s morning low surging to 18.5 degrees Celsius.