Make love not war seems to be the theme in the battery market.

After a 10-month battle with SK Innovation over intellectual property theft related to electric vehicle (EV) batteries, LG Chem won a judgement in its favor from the United States International Trade Commission.

It is a preliminary ruling, and the final verdict will not be known until later in the year. And SK Innovation could appeal.

But the sense in the market is that cooperation is the way forward, that the business is too important and too big for bickering.

In a statement issued on Sunday, SK Innovation seemed to be speaking the language of conciliation, saying that the rival that just beat it hands down is “a partner in the industry that we need to cooperate with.”

LG Chem and SK Innovation are two of the Korean companies eyeing the EV battery market. Already seven out of the top 10 chaebol have jumped either directly or indirectly into the EV battery industry.

According to SNE Research, the global battery supply for electric vehicles stood at 326 gigawatt hours as of 2019, which is an oversupply compared to 190 gigawatt hours forecast for demand. 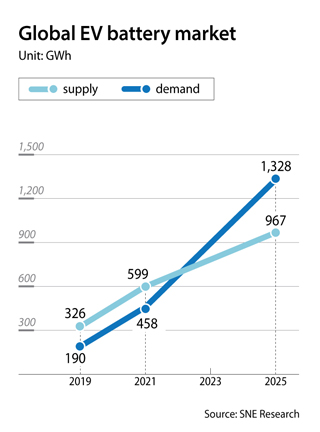 Three years later, the balance will be flipped.

Many local companies are scrambling to lay the foundations in the business, and increasingly, they are willing to work with others to achieve their goal.

Lotte made its first attempt to enter the EV battery industry last year. It bid to acquire Hitachi Chemical, a Japanese chemical company, but failed to conclude the deal.

Posco Chemical is accelerating investments on materials, used to create lithium secondary batteries. It finished the first phase of the construction of a production plant in Gwangyang, South Jeolla, which can produce around 6,000 tons of battery cell materials a year.

GS Engineering & Construction announced in early January that it would build a battery recycling facility this year in Pohang, North Gyeongsang. It plans to invest in EV batteries.

Some are working with other companies to gain their place in the EV battery market. Hyundai Motor Group is talking with LG Chem, discussing the creation of a joint venture. SK Innovation won a bid last year to supply around 10 trillion won ($8.4 billion) worth of EV batteries to Kia Motors. The partnership will start next year and continue through 2024.

The companies have to get it right, and soon, the reality is that the three major players - LG Chem, Samsung SDI and SK Innovation - have been in deficit for years. LG Chem reported more than 454 billion won in operating loss for its EV battery business just last year.

Another challenge for local companies is foreign competition.

Battery manufacturers in China and Japan are starting to gain an edge in price competitiveness and are climbing out of the red.

If one of these companies dominates the market, experts worry the market will turn into a game of chicken, with players racing to cut corners to reduce costs.

The industry estimates that around 120 EV battery manufacturers out of a total of 200 in China are now bankrupt.