Koreans on cruise to be airlifted

Koreans on cruise to be airlifted 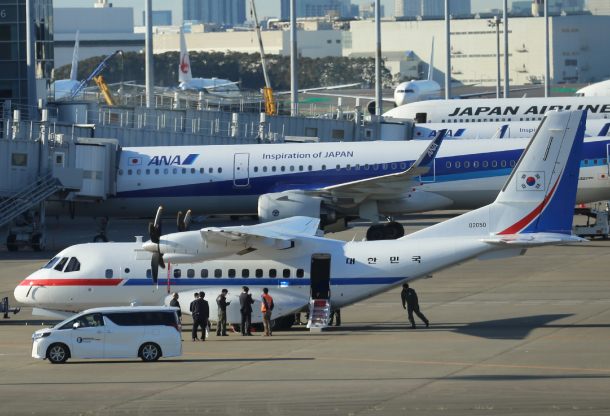 A South Korean military plane arrives at Japan’s Haneda Airport Tuesday afternoon to evacuate four nationals and a Japanese spouse from a quarantined cruise ship docked near Tokyo after an increase in onboard infections of the new coronavirus. The plane is set to return to Gimpo International Airport in western Seoul this morning. [YONHAP]

A military plane designated for Korea’s president arrived in Tokyo Tuesday to evacuate four Korean citizens and one of their Japanese spouses from the coronavirus-ridden cruise ship Diamond Princess docked in Yokohama, Japan.

The plane is due to return to Korea through Gimpo International Airport around 8 a.m. this morning, after which the evacuees will be placed under quarantine at a government-designated facility in Incheon for a period of two weeks.

A total of 14 Koreans - nine passengers and five crew members - are on board the Diamond Princess, a cruise vessel carrying 3,711 passengers and crew that has been placed under quarantine since Feb. 4.

As of Tuesday, 456 people on the ship tested positive for the novel coronavirus, more than half of all confirmed virus cases in the world outside mainland China.

According to Vice Health Minister Kim Gang-lip, Seoul decided to arrange the evacuation due to the wishes of four of the Koreans - including one crew member of the ship.

The Japanese husband of one of the four will also be included in the evacuation.

A VCN-235 plane, also known as Air Force Three, was chosen to undertake the mission given its relatively small size that can accommodate up to 19 passengers, Kim said.

This will mark the fourth time the Korean government carries out an evacuation of its citizens affected by the coronavirus outbreak.

A total of 848 Korean nationals and their Chinese family members living in Wuhan and other nearby areas in Hubei Province were brought home aboard three separate charter flights in earlier weeks.

The other 10 Koreans chose to remain in Japan. None of the 14 have tested positive for the virus.

After a controversial two-week long quarantine period of the Diamond Princess, the Japanese government said it would begin to disembark passengers aboard the ship from Tuesday until Friday, while warning that the country now potentially faced “the early stage of a domestic outbreak.”

Various countries have begun or are planning ways to evacuate their citizens aboard the ship in ways similar to the flights from Wuhan.

On Sunday evening, the U.S. government extracted 380 Americans from the ship, who were then flown out of Tokyo’s Haneda airport to an air force base in California.

In China, where the coronavirus originated from the city of Wuhan, a total of 73,336 people have been infected as of Tuesday, of which 1,874 have died.

Japan reported 66 cases of the coronavirus separate from the cases on the Diamond Princess, making it - after Singapore - the country with the largest number of virus infections outside of China. Last week, Tokyo announced its first fatality from the virus, an elderly woman in her 80s who had been hospitalized since Feb. 1.

While Seoul was hesitant at first to carry out an airborne evacuation of its citizens on the Diamond Princess, since most are residents of Japan and have few contacts in Korea, the U.S. government’s evacuation operation Sunday prompted it to negotiate its own evacuation plan with the Japanese government.

Deputy Minister Kim said a doctor, nurse and quarantine officials accompanied the VCN-235 plane to Japan Tuesday, where they will conduct preliminary tests on the evacuees before they are flown out today.

If any of the five passengers due for evacuation display symptoms of the virus, they will be required to remain in Japan and transferred to a local medical facility, Kim added.