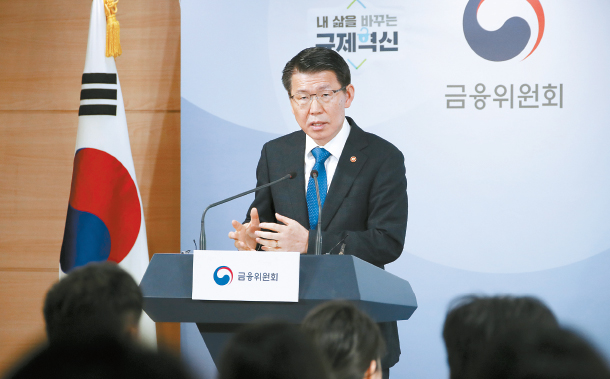 The head of Korea’s top financial authority told reporters Wednesday that the government will continue its push to deregulate the industry, despite recent private-equity debacles.

“Easing regulations could have unexpected side effects,” Financial Services Commission (FSC) Chairman Eun Sung-soo said during a press briefing. “However, [policies] need to go in the direction of new innovation and convergence.”

He said the biggest dilemma that the financial authorities face is to which extent it allows or it regulates whether it is private equity funds or person-to-person (P2P) financial services.

The financial authorities have been under attack since last year as a series of private equity schemes blew up in investors’ faces - from the derivative-linked fund sales to the more recent evaporation of risky assets at Lime Asset Management, Korea’s largest hedge fund.

In both cases, investors who reportedly received little warning about the risks face massive losses. Some are expected to lose all of their investments.

The deregulation efforts allowed Lime to grow its assets from just 20 billion won ($17 million) to 5 trillion won by the time signs of instability began showing at four of its funds last year.

Financial authorities have come under fire recently, with critics questioning whether the government was actively engaged in industry oversight. The Financial Supervisory Service (FSS) took six months to publish the results of its investigation into the company, which it began in August.

Eun added during the press conference that the release of the investigation results was late because they were waiting on an outside audit from accounting firm Samil PwC.

“We only wanted to make a comprehensive announcement,” he said. “We weren’t trying to avoid our responsibility.”

Last week the Securities and Futures Commission, which is under the FSC, announced fines of 19 billion won and 16 billion won against Woori Bank and Hana Bank, respectively, for failing to fully disclose the risks of derivative-linked funds to its investors.

The FSC chief said the agency will announce whether it will move forward with legal action against Woori and Hana Bank regarding the sales by March 4.

Eun declined to comment on whether the financial authority will take legal action against Woori Financial Group Chairman Sohn Tae-seung. The financial group’s shareholders’ meeting next month will determine whether his term as chairman is extended.

“It is not appropriate for the FSC chairman to make every little comment in regards to legal actions,” Eun said. “Whether [Sohn’s] term is extended or not will be decided by the [financial group’s] board of directors after reviewing its shareholders’ value.”

Eun said the more immediate issue at hand is solving the Lime Asset crisis and dealing with economic fallout from the spread of the new coronavirus.