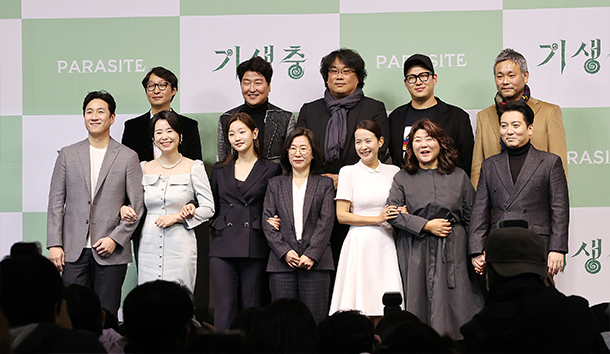 Winning over one hundred awards from international film festivals and prestigious film associations around the world was a history-making feat for director Bong Joon-ho and his genre-bending film “Parasite.” But when the director, the cast and the rest of the “Parasite” team stood on stage after the movie was named Best Picture at the Academy Awards on February 9, not only the American audience, but everyone back home in Korea swelled with pride as they witnessed a moment that will be forever seared in local history.

After returning to Korea, Bong and the cast met with local press at Westin Chosun Hotel in central Seoul on Wednesday to provide a behind-the-scenes look at their Oscar campaign and share what it was like to attend the ceremony.

Song Kang-ho and Bong spent the most time traveling from event to event promoting the film, but the director admitted that he was startled when he learned that the campaign for an Oscar would start in August and continue for six months.

“Our American film distribution company, Neon, is an independent company, far smaller in scale to big studios like Netflix,” Bong said. “Since we lacked the budget [that the big companies had,] we went for volume. Song and I must have given a couple hundred interviews at various film events, and on some nights we would get nosebleeds [from the sheer exhaustion].”

“But as I persisted on this journey, I came to realize that this campaign is more of an inspection process where people are able to probe deeper into the story, to satisfy their curiosity about the film. That five- to six-month journey is an Oscar tradition [that pays respect to the films] before the big finale at the ceremony.”

One of the unexpected products of the campaign was the recently-announced limited HBO drama series that “Parasite” is being adapted into.

“I’ll be participating as the producer of the series and I’ve already met with [executive producer] Adam McKay] to talk about the series,” Bong said. “The basic message of the story will be the same: to spotlight the wealth inequalities between social classes. But the black comedy and thriller aspects of the film are going to be a tad heavier and more dense.”

But despite press reports that Hollywood stars Tilda Swinton and Mark Ruffalo would be appearing in the upcoming series, Bong insisted that the project was “still in the beginning stages” and that casting decisions were nowhere near final.

“The TV drama version of ‘Snowpiercer’ is coming this May, but that project began around 2014 to 2015,” Bong continued. “I believe the HBO version of ‘Parasite’ is going to take just as long. What I can tell you now is that HBO, McKay and I are taking our first steps to dive into the TV show, and it’s all looking good.”

The press was eager to see the Oscar awards in person, but the “Parasite” team did not bring them along, instead opting to keep them safe. According to Kwak Sin-ae, the producer of the film and CEO of the film’s producer Barunson E&A, two of the trophies -- Best Picture and Best International Feature Film -- are being kept in her office.

“These trophies are really heavy, so Bong gave me the [Best International Feature Film] award to keep,” Kwak said. “The trophies each have the respective winner’s name written across it, so each winner took the trophies that had their names written on it home.”

The other two trophies, Best Director and Best Original Screenplay, are currently in possession of Bong and screenwriter Han Jin-won.

“There’s no particular reason behind the making [of the black-and-white film],” Bong said. “I’ve made one before for ‘Mother’ (2009), but I just have this yearning about old classic films. It’s just my cinematic curiosity peeking in to imagine how I would have made a film if I was a director living in the 1930s.”

Although the director wanted to refrain from making any assumptions about the black-and-white version, he did reveal about one audience’s comment about the film after it was screened at the Rotterdam festival.

“One person said that ‘I think the scenes smell even more in the black-and white vision,’ I didn’t understand it at first, but more I think about it, I think in [black-and-white] the audience will be able to appreciate and feel the detailed expressions and performances of the actors, perhaps due to the lack of color. You can feel the actors’ gaze more vividly through the screen. I think it’s going to be another fun project.”