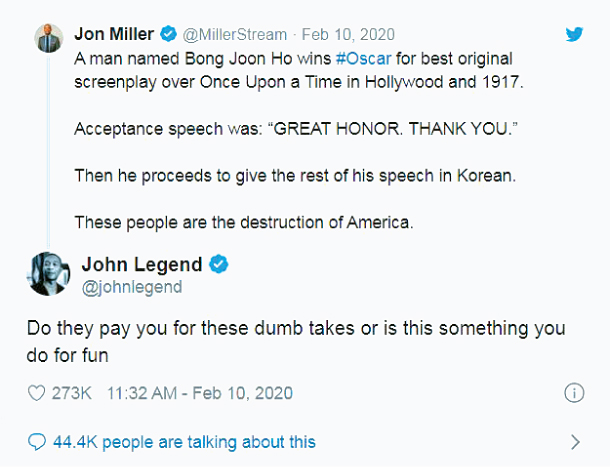 During the Oscars, Jon Miller, a host on American conservative media outlet BlazeTV, tweets about director Bong Joon-ho giving a speech in Korean. Many criticized him for being racist, with even celebrities such as John Legend calling him out. [SCREEN CAPTURE]

On Feb. 11, an uploaded YouTube clip from “The Ellen Show” went viral on social media, not because of the host’s usual witty humor, but for a joke about director Bong Joon-ho at the Oscars that many viewers found offensive.

The clip, titled “Ellen Texted Bong Joon Ho a Nude Photo, and He Hasn’t Responded” was about how host Ellen DeGeneres congratulated significant figures at this year’s Oscars through text message, and of course “Parasite,” Bong, and his famous translator, Sharon Choi, came up. The joke regarding Bong was about how Ellen would have to text Choi first in order to get to Bong and how complicated the process could get. At the end, Ellen wraps it up by saying, “Long story short, I sent him a nude. I haven’t heard back.”

The punchline had the audience cracking up, but after the clip was uploaded online, many people weren’t amused. The top comment, which drew over 2,500 likes, read “English is a language not a talent.” Other popular comments that followed were “Sick of her making jokes on Asian people. Thank God she didn’t host the Oscars this year.” One comment was simply: “Rude.”

Local netizens wrote that the host’s remark was a “typical racist joke about Asians.” They claimed that Degeneres was implying that Asians don’t speak English fluently. Others drew the conclusion that she seemed to be suggesting that all the people should speak English fluently. However, American media outlets didn’t seem to find a problem with the entertainer’s crass remarks - the only media that picked up on the controversy were Korean outlets or English language Hallyu-focused news sites.

One racist remark that was lambasted on Twitter was from Jon Miller, a host on BlazeTV, an American conservative media outlet. During the Oscars, Miller tweeted that while accepting the award for best original screenplay, Bong started off his speech by saying “Great Honor. Thank you,” and then proceeded to speak in Korean. The tweet ended with, “These people are the destruction of America.”

After his tweet began to spread on Twitter as people were calling him out for being racist, Miller added that he was not saying “these people” in reference to Koreans but instead to Hollywood for choosing “a foreign film that stokes flames of class warfare over 2 films [he] thought were more deserving.”

The director and the cast weren’t strangers to receiving ill-informed, even shocking questions either.

Last month, on the red carpet of the Screen Actors Guilds (SAG) Awards, at which the “Parasite” cast received the Best Ensemble Cast award, a journalist from American entertainment media outlet Variety asked the actors and director, what was “the best part about being famous in America.”

“Is that the question?” Choi responded to make sure she understood the question correctly. Upon hearing the question, the team seemed confused. Song Kang-ho tried to answer the question nicely by saying that there was “a lot of delicious food to eat.”

Before the Oscars, an ABC correspondent asked Bong, “what made you decide to have the film in Korean when you had other films in English?”

To this, the director said that he wanted to explore a theme about the rich and the poor with characters that were closer to the reality that he sees in his daily life.

On Twitter, however, the reporter’s question was dubbed pointless, with people questioning the reporter’s motive and wondering if she would have asked the same question to an American director.