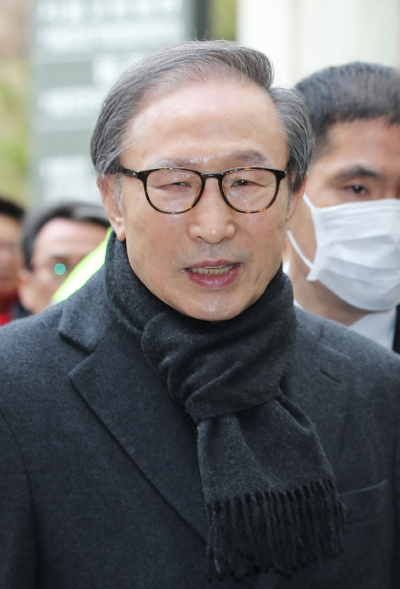 Former President Lee Myung-bak lost his appeals trial on Wednesday and was sentenced to 17 years in prison. The 78-year-old former leader was immediately taken into custody, as the court canceled its bail order that had kept him under house arrest for nearly a year.

The Seoul High Court found Lee guilty of multiple charges of corruption, embezzlement and bribery. In addition to the 17-year prison term, the court also ordered Lee to pay 13 billion won ($10.9 million) in fines and 5.78 billion won in forfeiture, higher than what he had previously been ordered to pay in the initial trial. In October 2018, the Seoul Central District Court sentenced him to 15 years in prison and fined him 13 billion won. At the time, the sentencing session was televised live by nearly all major broadcasters.

The high court also ended Lee’s bail and ordered the state to take him into custody. The former president was sent immediately to a detention center from the courtroom.

Lee was released on bail on March 6, 2019, after nearly a year of imprisonment before his trial on graft charges and after his initial conviction. At the time, the Seoul High Court released the former leader on bail and put him under house arrest to guarantee his defense rights during an appeal.

The high court on Wednesday largely upheld Lee’s initial convictions. He was found guilty of embezzling about 25.2 billion won from DAS, an auto parts company that prosecutors believe served as a funnel through which the former president amassed funds for his political and personal activities. DAS was legally registered in the name of his elder brother, Lee Sang-eun.

In its verdict, the high court did not make a specific mention of who the actual owner of DAS is. The Seoul Central District Court had ruled that the former president is the de facto owner of the company.

It also upheld graft convictions, including a charge that Lee had collected bribes from Samsung through DAS in return for issuing a presidential pardon to its chairman, Lee Kun-hee.

The high court said the former president received 8.9 billion won in bribes from Samsung. The conglomerate paid legal fees on behalf of DAS in a trial in the United States, and the tycoon, convicted in July 2009 for operating a slush fund to bribe influential prosecutors, judges and politicians, was pardoned in December that year.

The court also criticized Lee. “The former president denied all charges, while blaming others by insisting that DAS employees, his former aides and Samsung officials had made false statements against him,” the court said. “He had not repented or shown remorse, even when his responsibility was clear.”