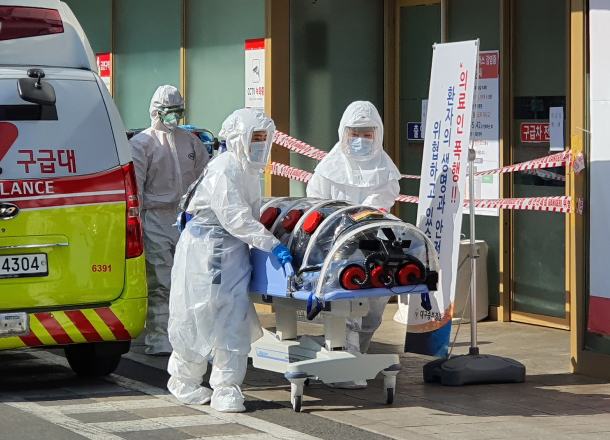 Medical workers wearing protective gear move a patient suspected of contracting the coronavirus from an ambulance to the Kyungpook National University Hospital in Daegu on Wednesday. On that day, 20 more patients were confirmed to be infected with the virus, and most of them were infected in Daegu. [YONHAP]

Twenty people were confirmed infected with the new coronavirus in Korea Wednesday, 14 traced to a church in Daegu visited by Patient No. 31.

Patient No. 31, a 61-year-old Korean woman from Daegu, was diagnosed Tuesday, but health officials said it was unclear whether she infected the other patients. It’s possible she contracted the disease from one of them or another churchgoer who has yet been diagnosed.

It was the first time health officials reported a double-digit increase in the number of infections in a single day.

A total of 51 people have contracted the disease so far in Korea, although 16 have been discharged from hospitals after full recoveries, according to the Korea Centers for Disease Control and Prevention (KCDC). Four were discharged Wednesday.

Those currently hospitalized in state-designated hospitals across the nation are mostly known to be in stable condition.

Among the 20 new patients confirmed Wednesday, 15 live in Daegu and three in North Gyeongsang, both in the southeastern part of the country. Eleven of the patients from Daegu and the three from North Gyeongsang appear to have contracted the virus in a Shincheonji church, a controversial religious organization, in Daegu, where Patient No. 31 went before being diagnosed Tuesday.

Among the four other victims in Daegu, one worked for Saeronan Oriental Medical Hospital in Daegu, where Patient No. 31 was hospitalized before testing positive for the coronavirus. Health officials believe the three other patients were somehow linked to the other Daegu patients and are investigating their travel routes. 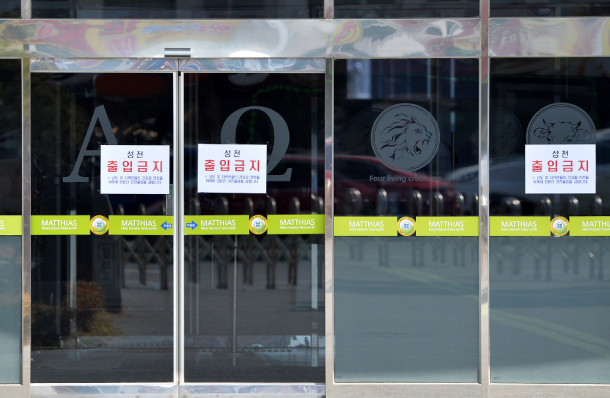 A church whose followers were confirmed to be infected with the novel coronavirus was shut down on Wednesday. Patient No. 31 was found to have attended services at the church in Daegu while she developed symptoms. [KIM SEONG-TAE]

Outside Daegu and North Gyeongsang, two cases of the new coronavirus were confirmed Wednesday.

Patients No. 15, 20 and 32 live in the same building in Suwon, and health officials said the 11-year-old was diagnosed while she was quarantined in her house after her mother was infected. The young girl didn’t go to school, said health officials.

In Seongdong District, eastern Seoul, a 78-year-old Korean man became Patient No. 40. He did not travel abroad and appeared not to have contacted any previously confirmed patient who contracted the disease, making him the fourth case in Korea in which health officials can’t trace the infection. The other three are Patients No. 29, 30 and 31, although the first two are an elderly married couple and one presumably infected the other.

According to KCDC officials, Patient No. 40 felt a fever coming on Tuesday and visited Hanyang University Medical Center in Seongdong, where he was diagnosed with pneumonia. Doctors there suspected he might have contracted the coronavirus and decided to test him. Results turned out positive Wednesday.

Hanyang University Medical Center shut down its emergency room Wednesday morning, stopped receiving outpatient visits in its pulmonology offices and disinfected all of its buildings.

Authorities in Daegu and North Gyeongsang were on high alert Wednesday for more patients as CCTV footage retrieved from the Shincheonji church showed hundreds of people attending the same service as Patient No. 31 on Feb. 9 and last Sunday. In both services combined, a little over a thousand people were counted, said Daegu Mayor Kwon Young-jin in a press conference Wednesday.

Most of the 14 infected patients from Daegu and North Gyeongsang are known to have attended one or both services in the city’s Nam District.

Kwon said local health officials would track down each person “instead of waiting for them to come to us.” The Daegu church is known to have around 9,000 worshipers.

When Patient No. 31 went to the church on Feb. 9 and last Sunday, she was being treated at Saeronan Oriental Medical Hospital for a car accident that occurred on Feb. 6. She was hospitalized at the hospital for 10 days from Feb. 7, but Daegu officials said she left the hospital several times because her injuries were minor.

Patient No. 31 faced criticism Wednesday as news spread she was offered a coronavirus test while at the hospital but refused, claiming she didn’t need it because she hadn’t come from China. Netizens pounced on rumors she seemed to have roamed around Daegu while exhibiting symptoms and refused to inform local officials about her travel routes after getting diagnosed.

Daegu officials acknowledged she was “uncooperative.”

“I think Patient No. 31 is feeling pressured now that her personal information is being revealed,” said Daegu Mayor Kwon. “In the beginning of our investigation, it’s true she was uncooperative.”

A Daegu official said Wednesday that the other Daegu patients were also refusing to cooperate with the authorities in disclosing their travel routes and that was an impediment to government efforts to curtail the spread.

KCDC Director Jung Eun-kyeong admitted Wednesday in a briefing that Patient No. 31 refused the Daegu hospital’s recommendation to be tested.

“I heard the hospital suggested she be tested,” said Jung. “But she hadn’t gone abroad and her symptoms were light, so I think she thought there was a low chance she could have contracted the disease.”

In a meeting with the leaders of Korea’s 17 education offices Wednesday morning at the Blue House, President Moon Jae-in urged schools to remain vigilant, yet not be daunted by fear. Hundreds of schools across the nation have canceled or postponed classes due to the coronavirus outbreak.