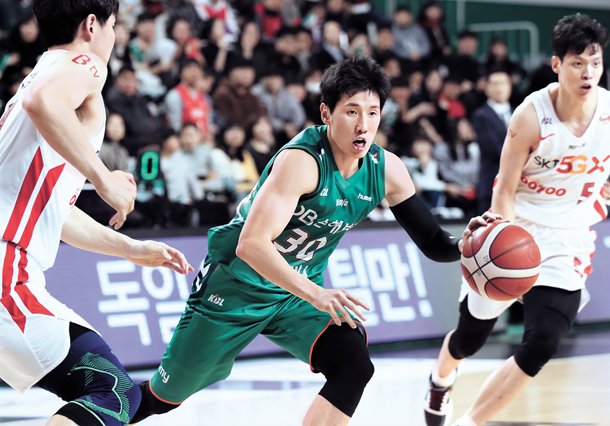 Doo Kyung-min of the Wonju Dongbu Promy, center, dribbles the ball during a match against the Seoul SK Knights at Wonju Gymnasium in Gangwon, on Jan. 15. [YONHAP]

With the return of Doo Kyung-min, the Wonju Dongbu Promy has made a big jump in the Korean Basketball League (KBL) regular season’s standing.

Before the 2019-20 season started, Promy wasn’t considered a threat to other clubs in the KBL. Instead, the defending champion Ulsan Hyundai Mobis Phoebus and Seoul SK Knights were the teams to look out for. Promy was considered just a little above average.

But as the season reaches an end, Promy is ranked top of the league, just 0.5 games ahead the Knights, with 27 wins and 15 losses. However, this could change in the not too distant future, as the Knights had a game in hand as Thursday afternoon.

Behind their success, there’s Doo, who just returned to the Promy after his mandatory military duty. He played in his first match on Jan. 10 and since then, he’s been averaging 14.2 points and 4.5 assists per game, as of Thursday.

As soon as Doo returned, Promy got in a seven-game winning streak, and the club jumped from fifth in the league standings to the top of the table. Since his return, Promy picked up 11 wins and two losses.

“Due to an ankle injury, I’m not at my 100 percent, in terms of my physical condition,” Doo said. “But it’s getting better so I think I can meet up to our head coach’s expectations.”

Interestingly, when Doo returned, many questioned his performance, as his position, shooting guard, overlaps with Hur Woong. But Doo dispelled concerns and proved to be a great addition to Promy by balancing his offence and adding his skills as a guard.

This shows in his statistics as well. Before Doo left to the military, he won the KBL’s regular season MVP for the 2017-18 season with an average of 3.8 assists. But this season, that number increased to 4.5. This made Promy’s head coach Lee Sang-bum’s job a lot easier as the club previously relied heavily on veteran point guard Kim Tae-sul.

However, Doo is not satisfied, yet. Nowadays, he’s been looking closer at his success rate than the total points he scored.

“To play more effective basketball, probability is important,” Doo said. “Rather than the number of points scored, it’s important to know how many of my attempts actually turned into a score. To give more chances to my teammates, I need to be detailed.”

Doo started basketball a little later than others, when he was in second grade in middle school, and it wasn’t until he was in college that he started to make an impression on the court.

“We had four training sessions a day, and I got there an hour before each one,” Doo said. “So I only had four hours of sleep. Since I started later [than others], I had to work on the basics longer, meaning I couldn’t work on fancy moves. Basics are must to have confidence. If I don’t have the confidence, then I can’t throw no matter how close I am or how many good chances I get.”

His habit of hard work still continues in the KBL as he’s always on the court when others are taking a break. He still spends extra time practicing his shots and dribbles, no matter how tired he is.

This season, Doo said he has great teammates to support him. Two of Doo’s teammates from Kyung Hee University - Kim Jong-kyu and Kim Min-gu - joined the Promy. As the three were drafted to different teams during the KBL’s rookie draft, this is the first time in six years for the trio to be playing together on the same team.

“We can tell just by looking at each other,” Doo said. “When there is space under the net, I would receive the bound and pass. Then, Jong-kyu would just catch it and dunk. When Min-gu is defending, I just cover his weaker side, without even noticing. It’s a play we regularly did back in college.”

With everything looking good for Promy, Doo’s goal is to win the first championship. Doo has experience playing in the playoffs, but he has never got to touch the championship trophy. Instead, the best finish was runner-up, back in both the 2014-15 and 2017-18 seasons.

“If MVP is an individual award, winning is a reward for everyone, our teammates and our fans,” Doo said. “I’m going to aim for a victory so I don’t leave any regrets once the season ends.”