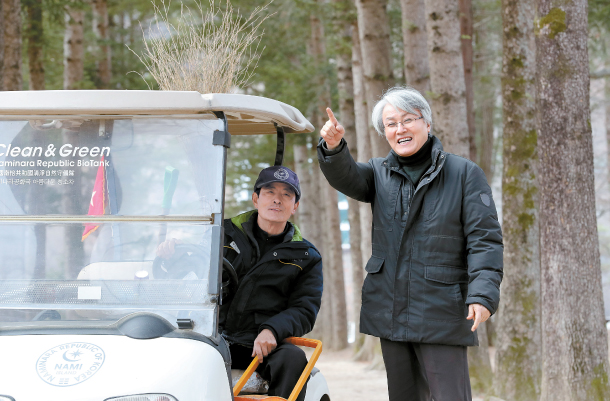 Nami Island CEO and president Jeon Myeong-jun, right, smiles while sharing a moment with a cleaner in his 70s at a park. [CHOI JEONG-DONG]

Nami Island, located in Chuncheon, Gangwon, has established itself as a must-visit place among foreign tourists, but some say it’s time for another leap forward. A drop in revenue generated by tourism remains an unsolved issue. The JoongAng Ilbo met Nami Island CEO and President Jeon Myeong-jun to discuss the future of the island as well as the impact of the recent outbreak of the novel coronavirus on the number of tourists.

Q. Are you worried about the new coronavirus?

A. It is an issue, but I am not so worried. The number of daily foreigners has not fallen from the usual 3,000 range. It is very tense within Korea, but to foreigners, they are not very worried because Korea is not the origin of the virus. Of course we are thoroughly disinfecting the areas and making preventive measures.

Has the outbreak impacted on the number of Chinese tourists visiting the island?

Chinese visitors dropped significantly since the installation of the U.S.-led Terminal High Altitude Area Defense [Thaad] antimissile system in Korea in 2016. Chinese group tours are completely gone. Foreigners are well dispersed from 130 different countries, and they take up one-third of our 3 million annual visitors. Of foreign visitors, Japanese and Chinese are not in the top 10. Instead, there are many Southeast Asian visitors from the Philippines, Vietnam, Thailand, Malaysia, Taiwan and Hong Kong.

According to the Korea Tourism Organization, some 17.5 million tourists visited Korea last year, and of that number, 7 percent visited Nami Island. Another statistic showed that 60 percent of tourists that visited Gangwon also took a trip to Nami Island. The 2015 Middle East respiratory syndrome (MERS) outbreak and the 2016 Thaad crisis affected tourism to Nami Island. When Chinese tourists disappeared in retaliation to the deployment of Thaad, the revenue in 2017 fell more than 10 percent and operating profit halved on year. How did you manage to recover?

Tourism is vulnerable to many variables such as epidemics, natural disasters and foreign affairs. I tried to overcome the drop by attracting foreigners with various attractions. I held different events such as performances and culinary experiences and invited officials from foreign embassies or tourism agencies in Korea to attract Southeast Asian tourists. We have Islamic prayer rooms, and we have the fourth halal-certified restaurant in Korea and the first outside Itaewon-dong in central Seoul.

Has the popularity of the K-wave had an impact on tourism to Nami Island?

Nami Island still reminds people of the Korean drama series, “Winter Sonata” aired in 2002, but that is not the sole reason for tourists to visit the island. Nami Island can now be forgotten as a drama filming site because there are numerous other attractions. The 460,000 square meters [4,951,399 square feet] is filled with exhibition halls, performance halls, experience halls, libraries, playgrounds and walking trails. Around 600 performances are held every year so that the tourists can experience things that they wouldn’t have an opportunity to in their daily lives.

Do you worry that too much focus is on attracting tourists from Southeast Asia?

As they do not see snow or autumn foliage in their home countries, Southeast Asians tend to appreciate our four seasons’ distinct scenic beauty. Enticing tourists from various countries is a long-term challenge. I would like to see European and American visitors make up half of our tourists by 2030.

Nami Island is also known for a special personnel system. The first retirement age is 60, but after examination, employees can work up until they are 80. All 450 employees were full-time regular employees long before the current government emphasized the elimination of non-regular workers. How has this system been working?

Sincerity to customers comes only when employment is stabilized. Of course, allocating manpower per season is a difficult task. In winter when we don’t need much manpower, we focus on repairing facilities and renovating the environment. To taste the mood in the fullest, there is no asphalt road on this island, and we even spray snow in the winter. We change sculptures regularly so that the visitors can revisit. But Nami Island is not a seasonal business so we need a fixed amount of labor force at all times.

I heard there are active job rotations. How does that affect the professionalism of the staff?

Tourism is a bit different from the manufacturing industry where professionalism is important. Here, jobs include working on parking lot management, ship operations, restaurants, cleaning, performances, exhibitions, studio and experience hall management, hotel management, souvenir sales and ride assistance. Even if you make mistakes, you will grow from various experiences. For active communication, we don’t have staff levels but only team leaders and team members. Recently, there was a performance planning team leader who wanted to change his position to a barista and even agreed to a pay cut. Respecting his decision, I also want to do cleaning work if I resign from my position as CEO.

How important is efficiency?

Sustainability is more important than profit. Of course, there needs to be profit to keep the business going, but profit should not be the number one priority. It’s not that I don’t think about efficiency and effectiveness, but I want to emphasize more the value of organization for proper service in tourism.

The current government lacks understanding and is indifferent toward the tourism industry. They do mention tourism policies but show no movement in the real world. For example, the plan to build the second Gyeongchun Line between Nami Island and Jaraseom Island was canceled. In 2014, Korea had more foreign tourists than Japan. But Japan caught up soon after the MERS outbreak in 2015, and the gap has widened ever since. Japan putting a lot of investment in tourism is a stark contrast to what we see here in the Korean tourism industry.

When did you start working on Nami Island?

I joined the company in 2005 at the age of 43. I was once an international trader and also tried to run a sports betting business. I applied to work on Nami Island in hopes of finding a lifelong career. I started from cleaning the floors and laundry work. As the company recognized my competence and sincerity, I could step into management roles little by little and eventually became the CEO in 2015. Since taking office, I brought numerous changes such as direct management, removal of group tour fees, establishment of the halal-certified restaurant and improvement of personnel systems. If former CEO Kang Woo-hyun paved the island’s foundation as an artist and creator, I tried to frame the organization based on autonomy and responsibility.

Even when I started an affiliate business, Tamna Republic, on Jeju Island, I tried not to lose the true essence of Nami Island. The essence of the tourism industry is to find common interests among diverse customer tastes. I wish Nami Island can provide a venue for entertainers and artists so that the visitors can enjoy themselves.

Nami Island allows the dream of having a lifelong job to become a reality. Although the first retirement age is 60, diligent and honest employees can apply for the second retirement age of 80. “The length of service is the basis of our evaluation,” a Nami Island official said. The company has also been operating the honorary retirement system since 2008, whereby the company provides a monthly pension of 800,000 won [$667] to the retiree. Yoo Je-geun, born in 1939, was selected as the 9th honorary retiree at a recent company’s foundation ceremony. After his discharge from the military, Yoo joined Gyeongchun Tourism Development, the predecessor of Nami Island, and has been cleaning and managing the facilities for more than 50 years. The president said Nami Island needs experienced elders like Yoo who can manage the island in a naturally friendly manner. One side of the island shows the Hall of Fame of the honorary retirees.