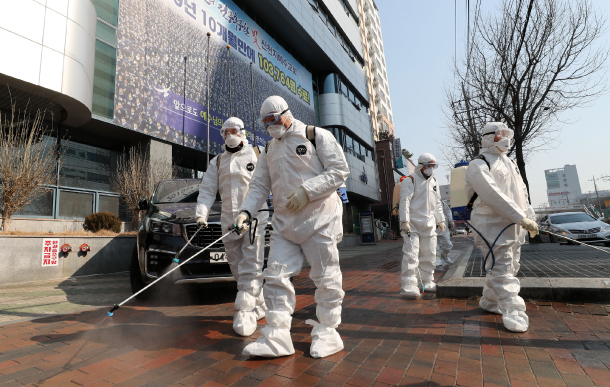 Quarantine officials disinfect the Shincheonji church in Daegu on Thursday as dozens of churchgoers were confirmed infected with the novel coronavirus. [YONHAP]

Korea has suffered its first fatality from the new coronavirus out of China, and cases doubled in a single day to 104 Thursday.

Health officials announced 53 new infections Thursday, 51 from the country’s southeastern Daegu and North Gyeongsang regions and two from Seoul in what the government declared “the beginning of community transmissions in limited scope.”

One patient who died at a mental hospital in North Gyeongsang Wednesday was posthumously confirmed a coronavirus patient Thursday, officials at the Korea Centers for Disease Control and Prevention (KCDC) said, though it was not immediately known whether the virus led to his death.

Further studies were said to be ongoing. It was the first time in Korea that a coronavirus patient died.

Similar to the spike on Wednesday, many of the latest infections were linked to a church run by the Shincheonji religion, a controversial Christian sect, in Daegu visited twice by Patient No. 31 this month. The close proximity at which worshippers sit beside each other during services seems to have facilitated the spread, health authorities said.

Vice Health Minister Kim Gang-lip said Thursday in a press briefing that the virus was starting to spread in local communities in “limited scope,” an escalation from the first phase of the virus when patients were normally infected on a foreign trip or through contact with people from abroad. Kim vowed to respond to such an escalation by revising the government’s countermeasures.

Korea’s total infections soared to 104 by Thursday afternoon. Thursday’s toll was the largest increase in the number of infections in a single day and the second time that a double-digit increase was reported after 20 cases were counted the day before.

Sixteen patients have been discharged from hospitals after full recoveries, with most of the rest in stable condition, according to KCDC data. 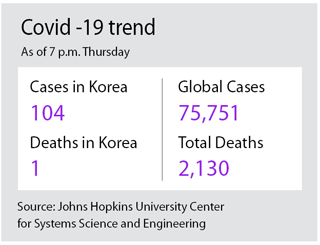 KCDC officials said the 65-year-old male coronavirus patient who died had no relatives and developed schizophrenia from the age of 10. He was hospitalized at Daenam Hospital in Cheongdo County, North Gyeongsang, before he started showing symptoms of a high fever recently.

Patient No. 31 was known to have visited Cheongdo earlier this month, though why and whether she visited Daenam Hospital was not immediately known. KCDC officials said they were interviewing Patient No. 31 for further clues and investigating all 600 staff and patients at the hospital for possible symptoms of the new coronavirus.

How the virus spread at the Daegu Shincheonji church and the Cheongdo hospital is still a mystery, and so is whether the two cases are related.

Patient No. 31, a 61-year-old Korean woman from Daegu who was suspected of spreading the disease in the Daegu Shincheonji church, was diagnosed Tuesday, but health officials said she, too, appears to have been infected by someone else in the church.

“We think Patient No. 31 contracted the disease either on Feb. 7 or 10,” KCDC Director Jung Eun-kyeong said in a press briefing Thursday.

“When we draw an epidemic curve based on infections from the Shincheonji church, we have some patients [who apparently caught the disease] on Feb. 7, 8 and 9. And then we have this large peak on Feb. 15, 16 and 17.”

Jung continued it was “difficult” to believe Patient No. 31 was the one who initially transmitted the virus to other worshippers at the church because there were a few other people at the church who seemed to have contracted the virus around the same time, which means they all might been exposed to some other source of the virus and then transmitted the disease to others on Feb. 9 and last Sunday when they attended a church service. 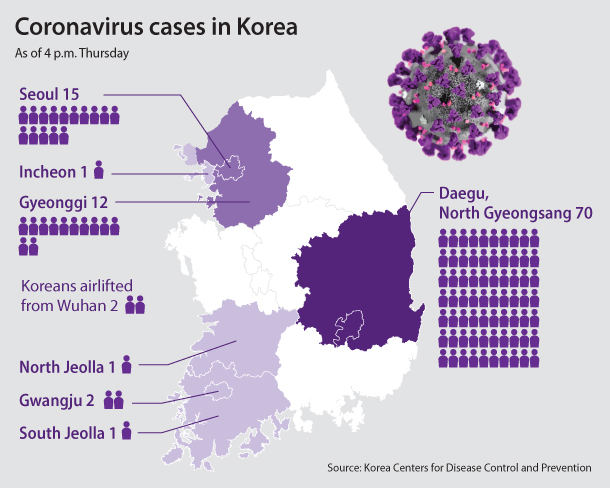 Jung said the KCDC received a list of about a thousand people who attended the same service as Patient No. 31 on Feb. 9 and last Sunday from the Daegu Shincheonji church and that every person has been told to self-isolate in their homes.

Jung said the government was also trying to get a list of some 8,000 other worshippers from the church to check them for symptoms.

Out of Thursday’s 51 new patients in Daegu and North Gyeongsang, KCDC officials said 28 either went to the Daegu Shincheonji church or were in contact with churchgoers, 15 were traced to Daenam Hospital in Cheongdo and seven are still being investigated.

One was traced to Saeronan Oriental Medical Hospital in Daegu, where Patient No. 31 was hospitalized before testing positive for the coronavirus.

Outside Daegu and North Gyeongsang, a 74-year-old man was diagnosed in Jongno District, central Seoul. KCDC officials said he went to the same Jongno senior welfare center as Patient No. 28, an 82-year-old.

Another Seoul patient has been infected as well, though how is unknown.

Meanwhile, President Moon Jae-in and Chinese President Xi Jinping had a phone conversation Thursday to discuss cooperation on the coronavirus outbreaks in the two countries.

“China’s hardship is our hardship,” Moon was quoted as telling Xi. “The government wants to add our efforts to our nearest neighbor China’s to fight the [outbreak].”

Xi expressed his appreciation for Moon’s support and promised to cooperate with Korea to end the spread of epidemics, Blue House spokesman Kang Min-seok said. The two leaders also agreed to maintain Xi’s plan to visit Korea during the first half of this year.